As we approach the back end of September there are two main fisheries that we focus on.  The Cap Mouth and Sandheads, aka the South Arm of the Fraser.

The Cap was fishing well prior to last weekend’s big rains and has since slowed down as some fish went up the river.  There are still some chinook and coho being caught, but it has been quite a bit tougher since the rains.  There are more fish coming, but there is more rain in the forecast as well.  Hopefully it doesn’t rain too much, and the river stays relatively low, so the fish stack up at the mouth and we have a chance to catch a few.  As usual, the best tactic is a flasher and anchovy fished close to the bottom. 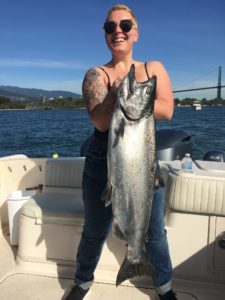 Another sunny day at the mouth of the Cap

Take note the DNV Firefighters Charity Derby is this Friday (today) so expect it to be busy at the Cap Mouth.  Although this derby makes the Cap Mouth busy for one day, they raise a lot of money for charity, and we are proud supporters.

If you look at the Albion chinook and chum test set data, you will see there was a significant push of chinook into the Fraser that started on September 19th.  The vast majority of these will be white chinook that are headed to the Vedder/Chilliwack or Harrison.  The coho push has also started and a lot of these will be hatchery coho headed to the Vedder/Chilliwack.  Chinook numbers will likely fall off from here but coho numbers will increase, as will chum.  If you have some calm seas, it’s worth heading down to the South Arm as we have caught chinook as late as mid-October in years past and there is usually enough coho around to keep it interesting.

I won’t be doing a saltwater report next week, so my next report will be October 8th.   Until then, tight lines!

Posted on September 24, 2021 by Jason Tonelli in Fishing Reports