The Cap Mouth has been slow this past week.  There are still a few chinook and coho being taken, but for the most part the fish have moved up the river with those rains we had late September and early October.  If you are looking for a quick flood tide fish, it’s worth a shot.

The coho numbers have been building in recent days in the Albion test sets as coho destined for rivers like the Vedder/Chilliwack and Chehalis are coming in.  If you look at the test sets you will see there are a few chinook around as well.  If you have the right sea conditions, the South Arm can be a good bet for hatchery coho and a chinook or two this time of year.  The crowds are gone as well, which makes it a lot more fun to fish.  Usually the coho are quite shallow, in the top 50 feet of the water column.  You might get the odd chum as well.  Looks like the chum numbers are going to be pretty low this year based on recent test set data I recently received.

Winter chinook fishing has been off to a strong start this year.  Although we call it winter chinook fishing, the reality is these are feeder chinook or fish that will be feeding all fall and winter and spawning next fall.  The usual spots in Howe Sound have been producing a few fish as have the Gulf Islands from the southern sections up to Gabriola.

This fishery normally has more participants from December onwards, but with Vancouver anglers not having access to chinook for 6 months in the spring and summer, there has been a distinct shift of more effort in September and now into October for feeder chinook.

This fishery is highly variable.  If there is bait around there are usually a few fish around.  No bait and its usually slow. Not rocket science but keep an eye on your sonar and move around to different spots until you find some bait.  The fish are generally close to the bottom as well, so make sure you have plenty of cable and keep an eye on those rigger depths.  You want to keep your gear within 10% of the bottom and make sure you are not in a sponge reef refuge. 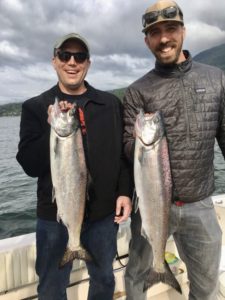 A couple of nice feeder chinook from a trip this week

In terms of reporting on actual fishing, there won’t be much of that going on in my reports this winter because this fishery changes incredibly fast.  The fish are there one day and potentially gone the next.  The best advice I can give you is to keep an eye on the weather and pick the days that are going to be the most enjoyable to fish.  You have 6 months of this, so you can get a bit picky!

See you in the shop or on the water!

Posted on October 8, 2021 by Jason Tonelli in Fishing Reports