Sockeye Update:
The phones are ringing constantly as everyone wants to know about sockeye.  So, let’s get right to it.  I was in the DFO & SFAB Sockeye Working Group meeting this past Wednesday and here is what I learned. 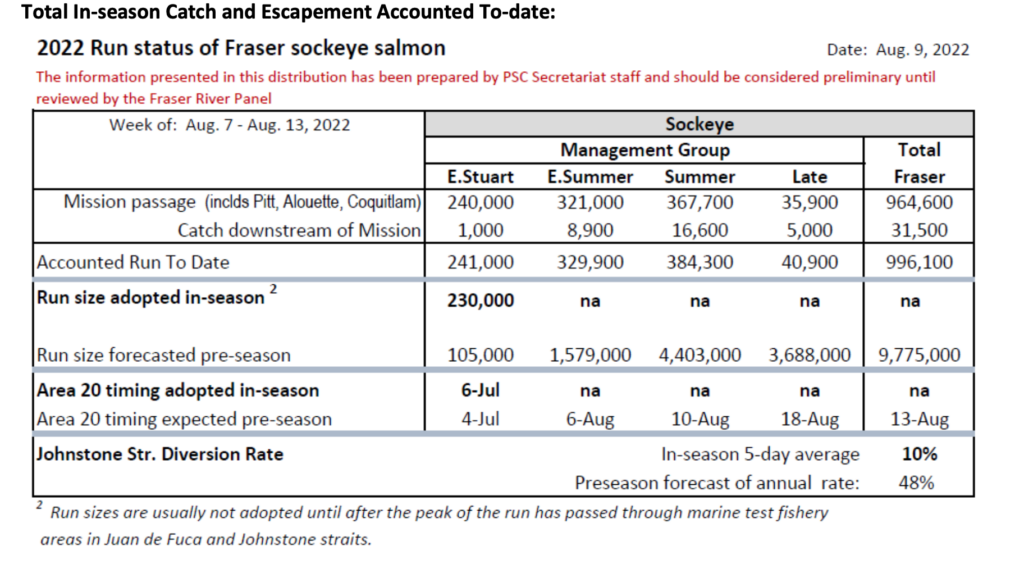 Here is the latest info.  The estimate of 9.7 million is based on a p50 forecast.   The run is tracking closer to the 10% level, especially the past week and a half, so that is called a p10 level.  A p10 level will not be sufficient to allow a commercial and recreational harvest and even a p25 level of around 4.35 million in total when the run is said and done, will likely not be enough to trigger an opening.

The main part of the run will be showing up in the next 2 weeks and if things don’t increase to at least a p25 and up to a p50 level by next week then the probability of an opening is very low. 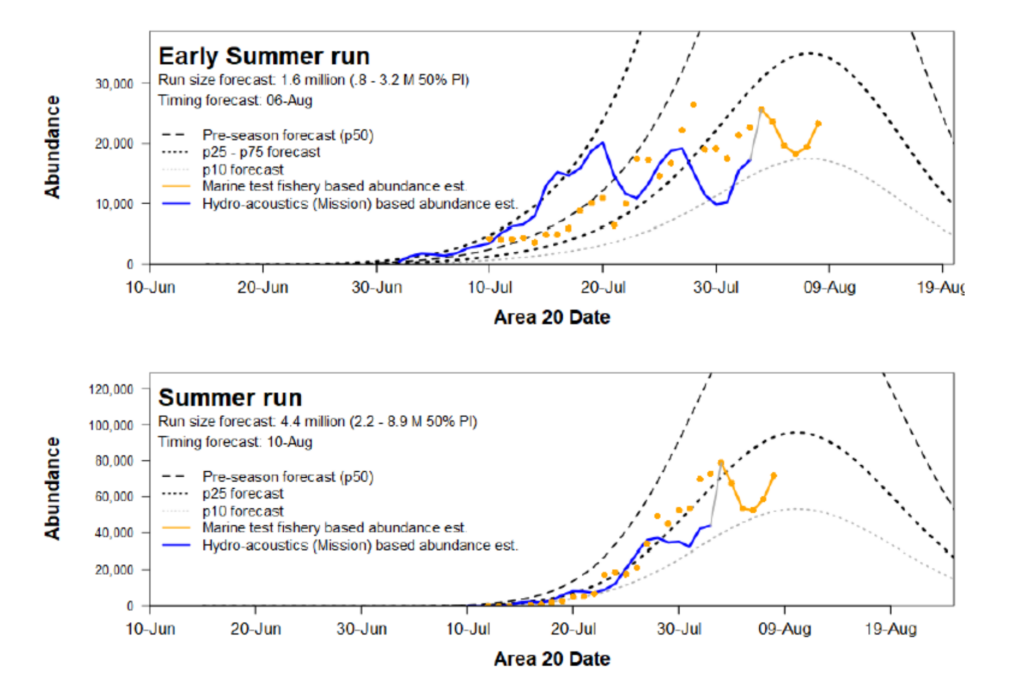 The data coming down the pipe is all tracking p10 to p25, so as each day passes the probability of an opening is certainly decreasing.  Sockeye don’t show up 2-3 weeks late, so don’t count on the “they are just late argument.”  They have a fairly finite fat reserve and each runs migration window is pretty tight.  They have days of reserves, but not weeks.  There have also been statistical models run where they pushed the run timing back a week and it still doesn’t look great.

As fishermen, we are always optimistic, and anything can happen, so we hope a huge push shows up that changes things.  That being said, it certainly isn’t looking that way as of today.  I wish we had better news, but so far this is what the data is telling us.  Next meeting with DFO will be next Wednesday and I will have an update in next week’s fishing report.

Coho & Chinook Update:
Locally the coho fishing has been decent.  We have been getting some nice hatchery coho along the West Van shoreline, 25-65 on the riggers, on white hootchies and smaller spoons. 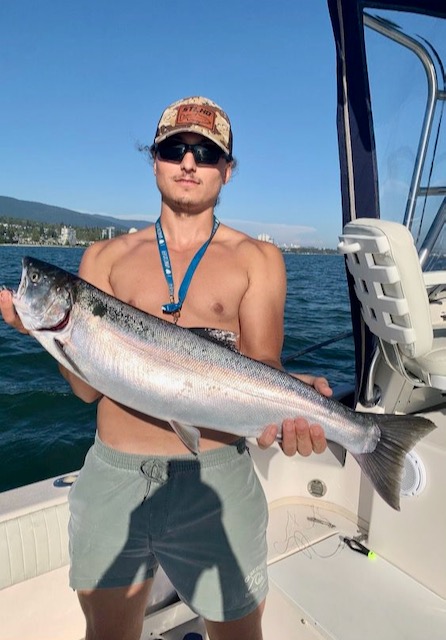 Chinook fishing has also picked up as more Fraser chinook get pushed over to West Van.  These aren’t stocks of concern.  These are the more prevalent Thompson chinook that usually run in that 8-15 pound range.  Remember that chinook open up from Point Atkinson to the Cap Mouth (Area 28-6 and 28-9) for 1 a day from 62-80 cm as of August 13, so this Saturday morning!  These fish are shallow, just like the coho, 25-65 on the riggers, so we often catch them while coho fishing.  If you want to up your chinook encounters, fish some anchovies or herring in a Rhys Davis teaser head as these chinook respond well to bait.

Chinook fishing over at Gabriola and Nanaimo continues to be productive as well.  We have been local quite a bit this past week because of the NW winds, but when we have made it across the fishing has been good.  These fish are deep, 250-300 on the rigger in the spots we like to fish, so glow flashers and glow hootchies are always a good place to start.  Last year this fishery went right until September and it should this year as well. 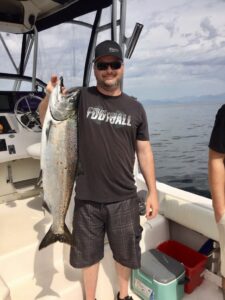 Marc’s guest with a nice hatchery chinook from Gabriola this morning!

September 1st, the mouth of the Fraser area will open for 2 chinook a day, just like previous years.  I think it will be quite a bit better than last year, which was unusually slow, as we have been catching quite a few white chinook all summer long.  The increased production from the Chilliwack hatchery should provide some better fall Fraser mouth fishing.  Remember the N Arm is now an SRKW sanctuary, so don’t plan on fishing there September 1st.  I will report on this in more detail in upcoming reports.

Posted on August 12, 2022 by Jason Tonelli in Fishing Reports