Lots to talk about in this week’s report, coho, chinook, sockeye and of course the weather.

Let’s start with the weather and then local fisheries.

If you are heading out this long weekend keep an eye on Saturday as Windy is showing some stronger NW winds, especially if you are trying to cross over to the Gulf Islands.  It seems to have gotten better than previous forecasts though, so it will likely be a game time decision.  Sunday and Monday look better, particularly in the afternoon.  Those 2 days are setting up for a nice late morning crossing and some late evening fishing and a smooth ride home.  Locally you will have your pick of spots and wind shouldn’t be an issue.

If you follow us on Instagram or Facebook then you will already know the coho fishing picked up this week.  We had some good fishing off Point Atkinson and the Cap Mouth.  On the calmer days we also found some schools of willing coho off South Bowen.  The fish seem to be as deep as 65 on the riggers in some scenarios but as shallow as 25 in others.  Stacking 2 rods on each rigger with a 20 to 30 foot spread is a great way to fish a lot of gear and cover a variety of depths.  It also ups your odds of a double, which is not uncommon in this fishery as these fish don’t travel alone.

Productive coho flashers have been the Gibbs Twisted Sista, Green Onion Glow, Purple Onion Glow and Oki Tackle’s Betsy.  Those paired up with a white hootchy with a shorter leader length of 24-28 inches has been productive.  Spoons in nickel and silver finishes with some green or blue on them are also excellent choices.  Some of our favorites are the Skinny G, Wee G, Kingfisher Silver Night Series in 3.0 and G-Force in 3.0.  Leader lengths are 4-6 feet.  Coho limits are 2 hatchery (missing adipose fin) per day, 30 cm or greater. 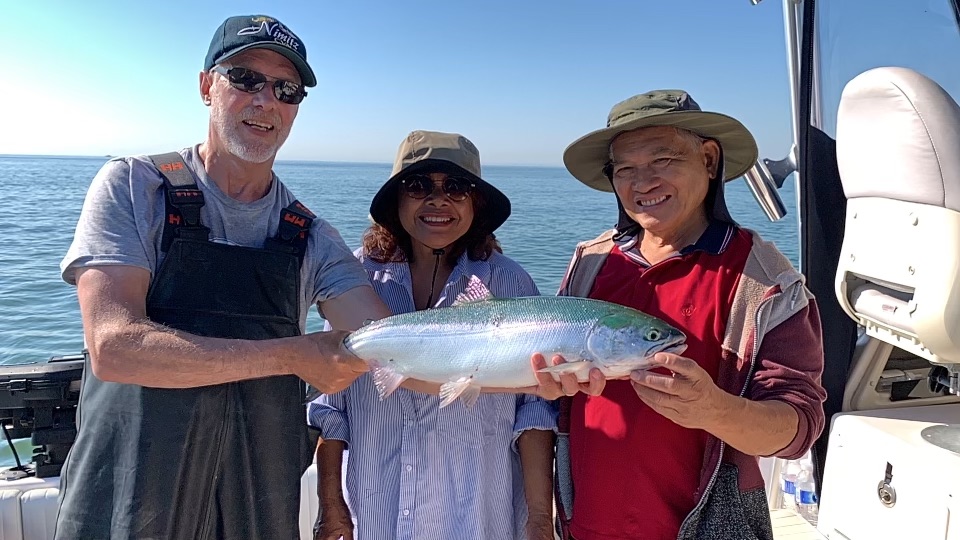 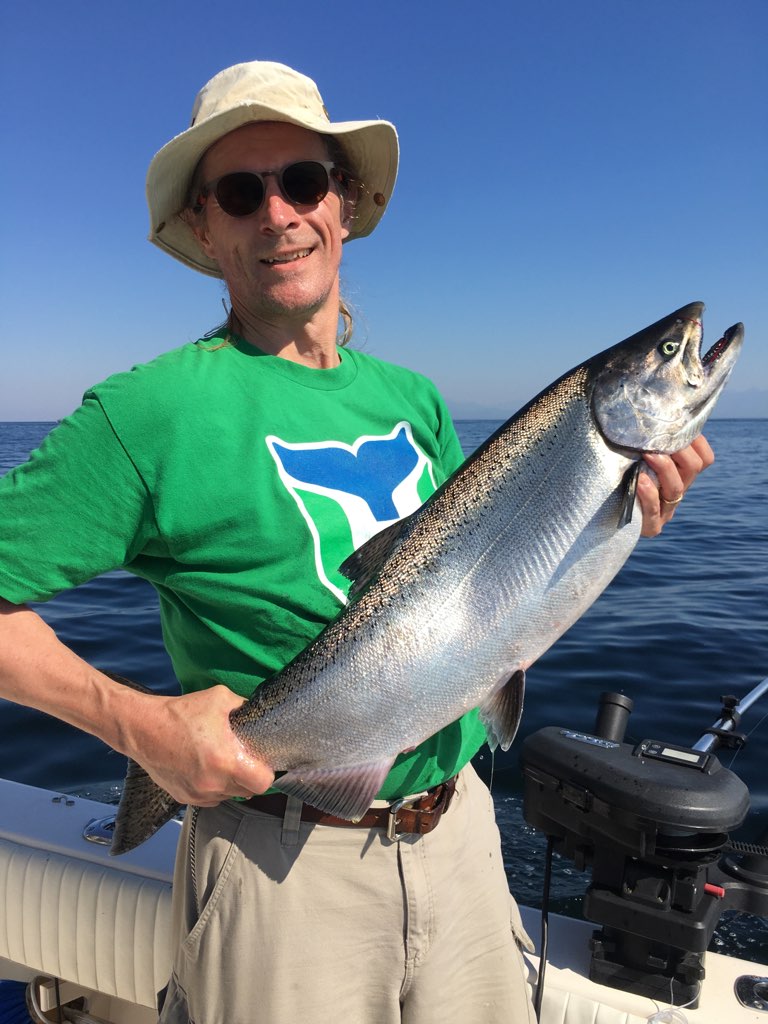 A nice chinook from a trip to Gabriola this week.  It’s common to get quite a few hatchery chinook such as this one.  Retention is 1 a day, hatchery or wild, 62 to 80 cm.

Local chinook opportunities are about to get a whole lot better on August 1st as area 28-6 opens for chinook retention.  This area is basically West Van from Point Atkinson to the small point of land where the Pink Apartment is.  Draw a line from point to point and fish inside of that and you are in 28-6.  Limits are 1 chinook per day between 62 and 80 cm, hatchery or wild.

This will be a great area to fish in August as you can fish for coho and chinook at the same time.  Most of the chinook encountered will be Fraser chinook in the 8 to 15 pound range and most of these will be headed to the Thompson River and are not stocks of concern, hence the harvest opportunity.  Luckily these fish travel fairly shallow, usually in the top 50 feet of the water column like the coho, so encountering both at the same time is common.  Area 28-9 is scheduled to open for chinook as well, on August 13th, so be ready for that.  As we get later into August, we will also see some of the Capilano white chinook start to show up in 28-6 and 28-9.

Okay, on to sockeye.  As the Chair for the Area 28/29 Sport Fish Advisory Committee, I am in weekly meetings with DFO to talk about sockeye.  So here is the update.  The early component of the run is now in the Fraser and it was well above the p50 forecast.  This is consistent with strong returns seen in Alaska, Skeena, and Osoyoos Lake.  Unfortunately, the river was very high and the fish have had difficulty navigating Hells Gate and Big Bar and have likely exhausted most of their energy reserves.  This will result in not very many of the early fish on the spawning grounds, despite the higher than forecast return.

Luckily the Fraser is dropping like a rock and has gone from 60% higher than normal to 30% higher than normal in a week and that quick drop will continue with this warmer weather.  This will be good for the summer run and fall run component of the sockeye return which will have more favorable migrating conditions.  The general consensus is that we should see a good return this year and if that happens there will be some recreational harvest opportunities.  Right now we have to sit on our hands and wait.  The data is far from being in for the summer and fall components of the run and DFO won’t make any decisions until the picture is much clearer.   If we do get an opening it will likely be in the back half of August and don’t expect much more than 72 hours notice.  I will continue to provide weekly updates as new information becomes available.

Posted on July 29, 2022 by Jason Tonelli in Fishing Reports