Well what can I say except wow, the fishing is awesome right now!  I am still in shock that there is no chinook retention in what has to be the best or some of the best chinook fishing off South Bowen in decades.  I rarely get this specific in the report, but I feel I need to today so you can get a feel for what is going on out there.  One of our guides was out on a 6-hour trip yesterday with two Dads and their young sons and they were into all sorts of fish.  At one point they got a quad on chinook and followed it with a double and a fellow guide also had a triple on.  The kids were all smiles when I passed them and that will be a day they won’t soon forget.  So, as you can see, there are some good numbers of chinook around. 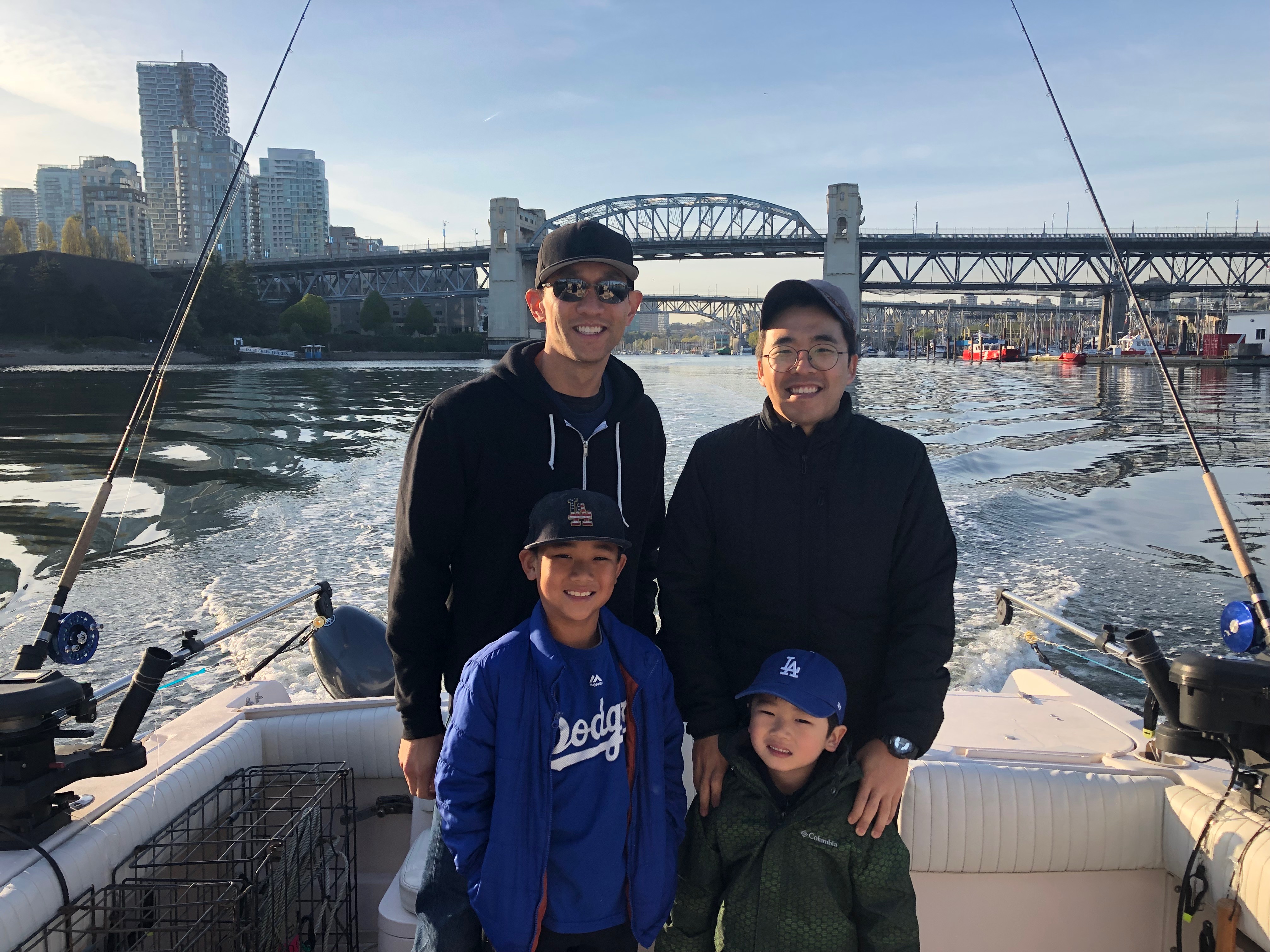 We are still fighting hard to let the Minister know we aren’t going to sit idle and accept his decision to make it non-retention of chinook.  There is a protest planned for Wednesday next week, see information at the end of this report.

So back to this hot fishing.  The best depths have been 90-135 and there are fish off South Bowen, the Hump, and the QA.  All these spots have had great action this week, and it just depends on the wind and where you can and can’t fish.  The water has really gotten into that algae brown colour this week, so you want to run the bright gear.  Hot flashers have been Salty Dawg, Lemon Lime, STS, BC, Green Onion Glow, and Chartreuse Phantom.  Bright spoons are working as well.  3.5 G-Force and Skinny G spoons have been working very well as long as they have some green and glow on them.  Some of the top colours have been Trailhead, Outfitter, and BC.  Bait has also been doing well, smaller herring and 5.5-inch anchovies in brighter glow green or chartreuse teaser heads have been very productive. 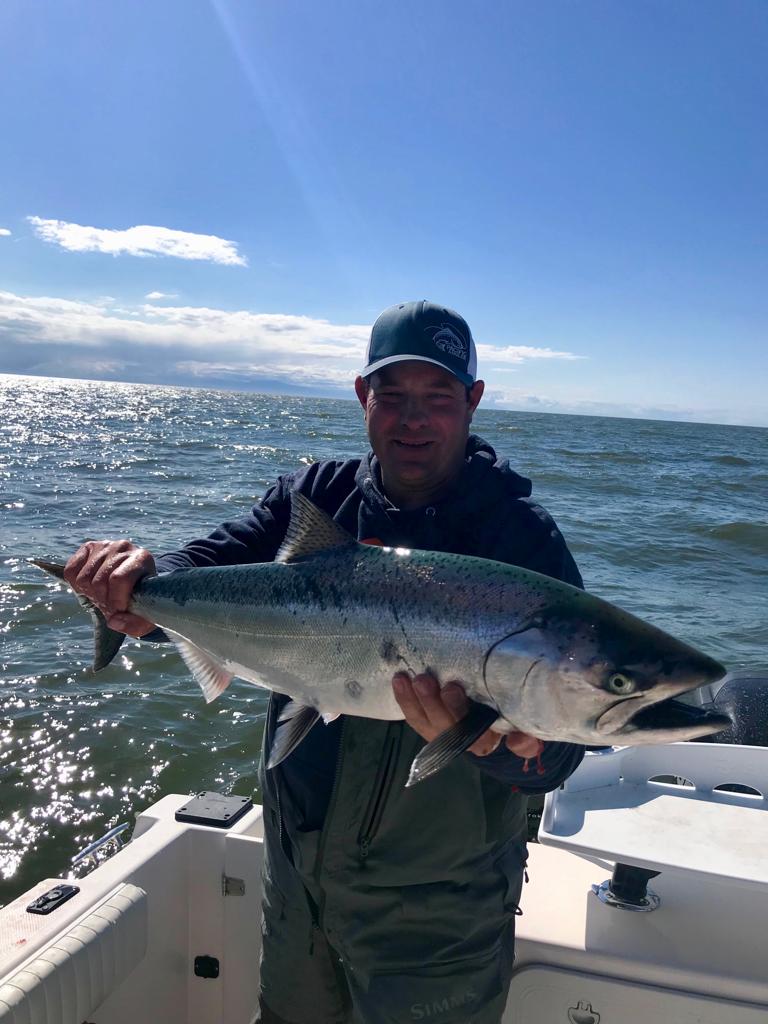 Our good friend Greg with a nice hatchery chinook from the QA early this week.

Crabbing is picking up and prawning is still decent.  I would highly recommend getting out on the water and having a blast fighting this aggressive and strong chinook.  We are dropping crab traps and prawn traps on our longer trips so we can send you home with some nice seafood and some great memories and sore arms!

Please join a peaceful protest of DFO’s decision to close recreational fishing to the retention of chinook.  Fisheries Minister Jonathan Wilkinson and DFO have announced large blanket closures which are an ineffective way to manage the recovery of early Fraser River chinook stocks. There is no scientific data to support the effectiveness of these closures.  The announcement has serious and substantial socioeconomic impacts on sport fisherman, the marine community and lacks meaningful action.  We’re encouraging all concerned individuals, groups and businesses to join us to protest the following:

DFO is shutting down one distinct chinook fishery and user group so they can shut down another user group on completely different chinook.  This closure to chinook retention will do nothing to protect the chinook stocks that need protecting.  The closure has been done for political reasons and is mismanagement of the resource at the highest level!  We want to make it very clear to Minister Wilkinson that to shut down the entire south coast so they can attempt to reduce First Nation in river impacts on interior Fraser chinook is not acceptable!  The closures to chinook retention in our local area between Vancouver and Nanaimo include Bowen Island, Howe Sound, Sunshine Coast and Gabriola Island.  All of these areas have been experiencing amazing chinook fishing (for non-interior Fraser stocks). This closure is being done for the opportunity to keep First Nations nets out of the Fraser to save interior Fraser stocks. Minister Wilkinson and DFO need to recognize that the chinook salmon that are off Bowen Island and across to Nanaimo are not early Fraser stocks of concern.  DFO has confirmed this through CWT (coded wire tag ) data and DNA sampling.  The resulting data clearly shows that the fish we catch in those areas are not the Fraser River stocks of concern we need to protect. This is a scientific fact, not speculation.  The fish we are catching are known to originate mostly from east coast of Vancouver Island streams but also the USA .  There is no conservation concern for these stocks and a 1 per day chinook limit or a 1 per day hatchery chinook limit, is certainly sustainable and acceptable from a scientific fisheries management viewpoint. DFO had this in their Option B proposal and despite SFAB (Sport Fish Advisory Board)  strongly recommending these options based on the science and modelling,  DFO refused to implement it.  We want DFO to take real and meaningful action on a recovery plan for early Fraser chinook that includes chinook predator control, habitat rehabilitation, hatchery enhancement and adequate funding of fisheries officers and habitat staff.  Currently there is no plan with funding in place for these crucial actions to take place and that needs to change now!

Posted on April 26, 2019 by Jason Tonelli in Fishing Reports