Well it’s official.  The DFO and Fisheries Minister have made it non-retention for chinook salmon on the south coast.  They just shut down some of the best fishing I have ever seen in our local waters and what is very likely the best fishing on the entire coast right now.  That’s just our area.  Let’s not forget about the iconic sport fishing communities on the Island like Tofino, Ucluelet, Bamfield, Campbell River, Renfrew, and Victoria, just to name a few.  The result is thousands of people are going to lose their jobs and it is going to cost this province hundreds of millions of dollars.

So how did we get here?  Well it’s a complicated scenario and the road to this closure has a lot of ups and downs and twists and turns, but it goes something like this.  Chinook stocks are diverse.  Some come from the Fraser, some from rivers that empty directly into the ocean, some spend 2 years in the freshwater before they leave to the ocean, others out migrate right away, some spend their ocean life in local waters, some go way offshore.  So, as you can imagine, some stocks might be suffering while others are doing very well.  Large blanket closures are an ineffective way to manage such a diverse resource.

Enter interior Fraser chinook.  These fish spawn in the interior tributaries to the Fraser, and they hang out in these rivers for 2 years before out-migrating.  To say things are not going well up there is an understatement; less water, long hot summers, warm water, forest fires, siltation, are just a few of the issues these fish have to face for 2 years.  The end result is the survival rate is extremely low.  The few that do make it after 2 years then have to make it past the seals as they leave the Fraser.  Of all the out migrating salmonids, these 2 year old chinook smolts are some of the biggest, only second to steelhead smolts.  As a result, the seals focus on them, as they do steelhead smolts.  As many as 47% of them are consumed by seals.  The few that make it then head offshore to feed and return 2 years later.  In general, they come back around the south end of Vancouver Island and into the south arm of the Fraser, returning in the months of April, May, June, and July.  There is no doubt these fish need to be protected and we are all for that.  Sport fishing regulations have been in place to do so for many years, so much so that our exploitation rate for these fish is either at 0% or so small that it is negligible.

So, what about all these fish off South Bowen right now and over in Nanaimo and Gabriola?  Well these are not the fish I just described above.  DFO has a lot of DNA data that shows what fish we are catching, that is how we can be so certain.  This is a scientific fact, not speculation.  The fish we are we catching in these areas are from a variety of rivers where things are not as dire as the conditions seen in the interior of the province.  The chinook stocks from these systems are stable, and in some cases are at or near record returns.  There is no conservation concern for these stocks and a 2 per day limit is sustainable.  A 1 per day limit is certainly sustainable and acceptable from a scientific fisheries management viewpoint.  If you have been fishing these past 2 weeks you know how many fish are out there.

Then why did we get shut down?   This is the question you should be asking and I am going to tell you the politics behind it.  The reality is this.  The interior Fraser chinook need protection.  Sport fishing regulations have been in place to do so for many years as noted earlier, and commercial troll opportunities for these fish have been reduced heavily in the past and this year are non-existent.   The last piece of the puzzle is First Nations in river fisheries for these same fish.  You can’t carve any more meat off the bone from the recreational or commercial fleet, the rest has to come from First Nations in river fisheries.  This isn’t me speaking; this is the DFO science that was presented in a variety of meetings and forums.  The only way to put more of these fish on the spawning beds is to stop in river netting of these fish.  Hence the recent closures and reduced opportunities for First Nations over the coming months as per the announcement yesterday.  I hope you are connecting the dots here and asking yourself this question.  So why is a sustainable fishery like we see off South Bowen, for non-interior Fraser chinook, which are experiencing good to excellent survival rates, closed?  You should also be asking yourself why this fishery is closed when it has absolutely nothing to do with these interior Fraser chinook.  Well we asked these very questions to the Minister and DFO these past few days.  The answer we received was this. Despite the fact our current local chinook fisheries have no impact on these interior Fraser chinook, they have to close the recreational fleet on a grandiose scale so they can reduce First Nation in river harvesting opportunities for interior Fraser chinook.  We pointed to their science that shows we aren’t catching those fish and asked if we could have 1 a day, the answer was no.  We asked if we could keep a hatchery only, which has absolutely 0 effect on Fraser fish as these fish are from the USA, the answer was no.  In short, the answer is the recreational fleet has to be closed first, and then they can take fisheries measures for First Nations second.  That precedent was set in a case that is often referred to as the Tommy Case.  Let me make this clear.  If there is a conservation concern, I will be the first to put the rods away, and if anyone has a right to the first harvest of those fish, I agree it should be First Nations for ceremonial and food fish purposes.  I get that if we are fishing for the same fish.  What I don’t agree with and what I don’t get, is the DFO shutting down one distinct fishery and user group so they can shut down another user group on totally different fish.  This is ludicrous and political, this is not scientific, and this is mismanagement of the resource at the highest level.  So, I think it is important that we are all very clear that this Minister just shut down the entire south coast so they can attempt to reduce First Nation in river impacts on interior Fraser chinook.  On our home waters that means they just shut down South Bowen, Thrasher, Nanaimo, which are all experiencing amazing fishing (for non-interior Fraser stocks), just to have the opportunity to keep First Nations nets out of the Fraser to save interior Fraser stocks.   You can see my frustration.  Unfortunately, I don’t think it is going to do much to help these fish.  DFO needs emergency hatchery production for these fish, the habitat needs some help, and we need to deal with the seals.  None of that is happening anytime soon from what I can see.  Since the DFO has sacrificed the whole south coast, I hope they plan on making sure the Fraser is net free until July 14.  I hope fisheries like this have now been closed 2019 Open Times for the Mid & Upper Fraser River First Nations Fisheries  – Week 16.  I will give the DFO the benefit of the doubt on this one and assume that is the case; I certainly hope so for the fish.  In the meantime, diverse and sustainable recreational fisheries remain closed and the south coast marine fishery and economy has been cut off at the knees.

We have had a lot of calls asking if you can still go fishing.  The answer is YES.  The regulations say non-retention of chinook, so you can still fish.  You will have to practice catch and release on chinook.  Fishing is nothing short of amazing right now.  Here is a picture from a charter yesterday and fishing was fantastic.  Of course, if you head out now it is catch and release, but that is still a lot of fun. 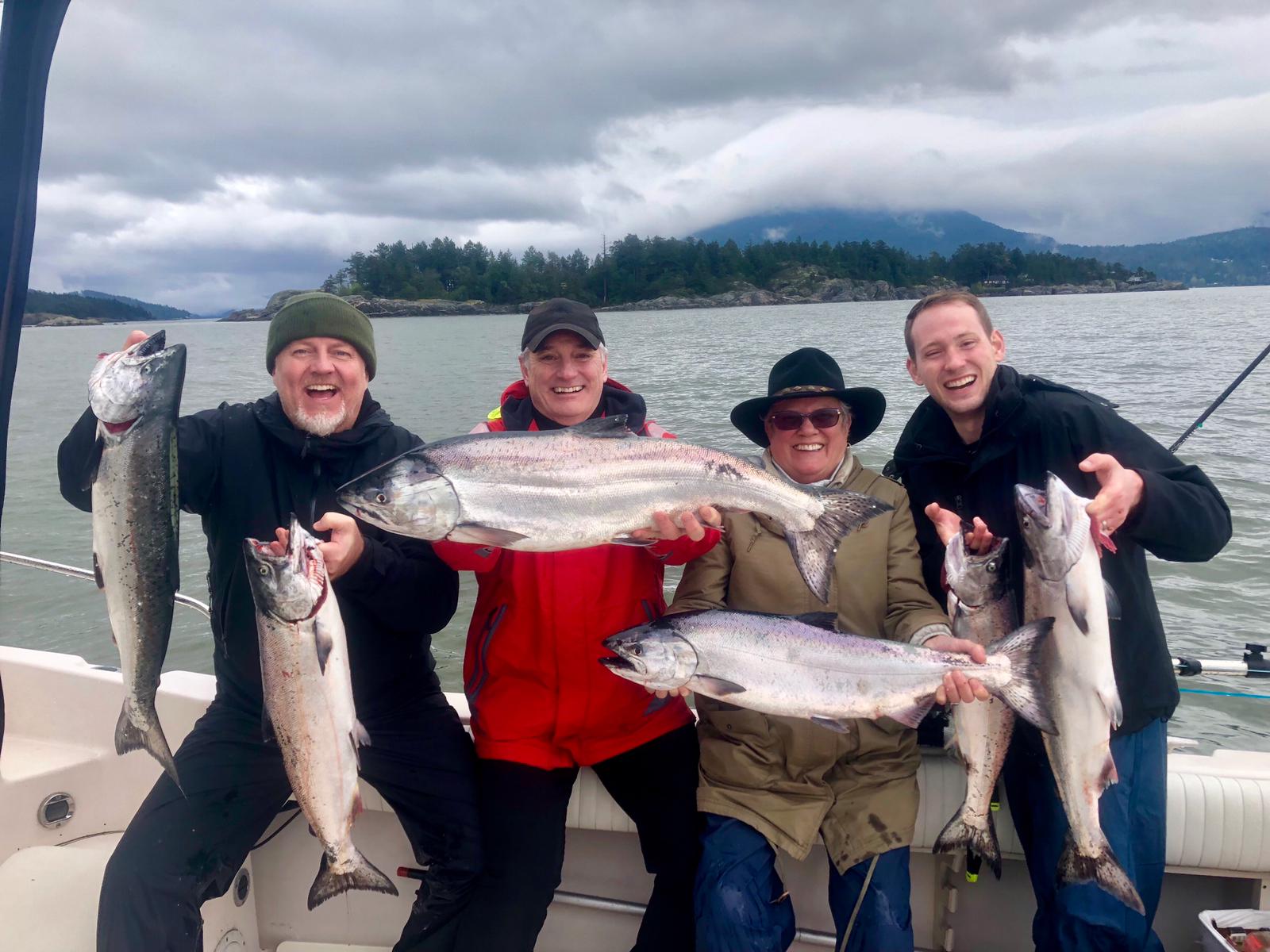 There are also some bigger fish showing up, just like I mentioned they would in last week’s report.  We saw a picture of a 26 and a customer of the shop got a 28. 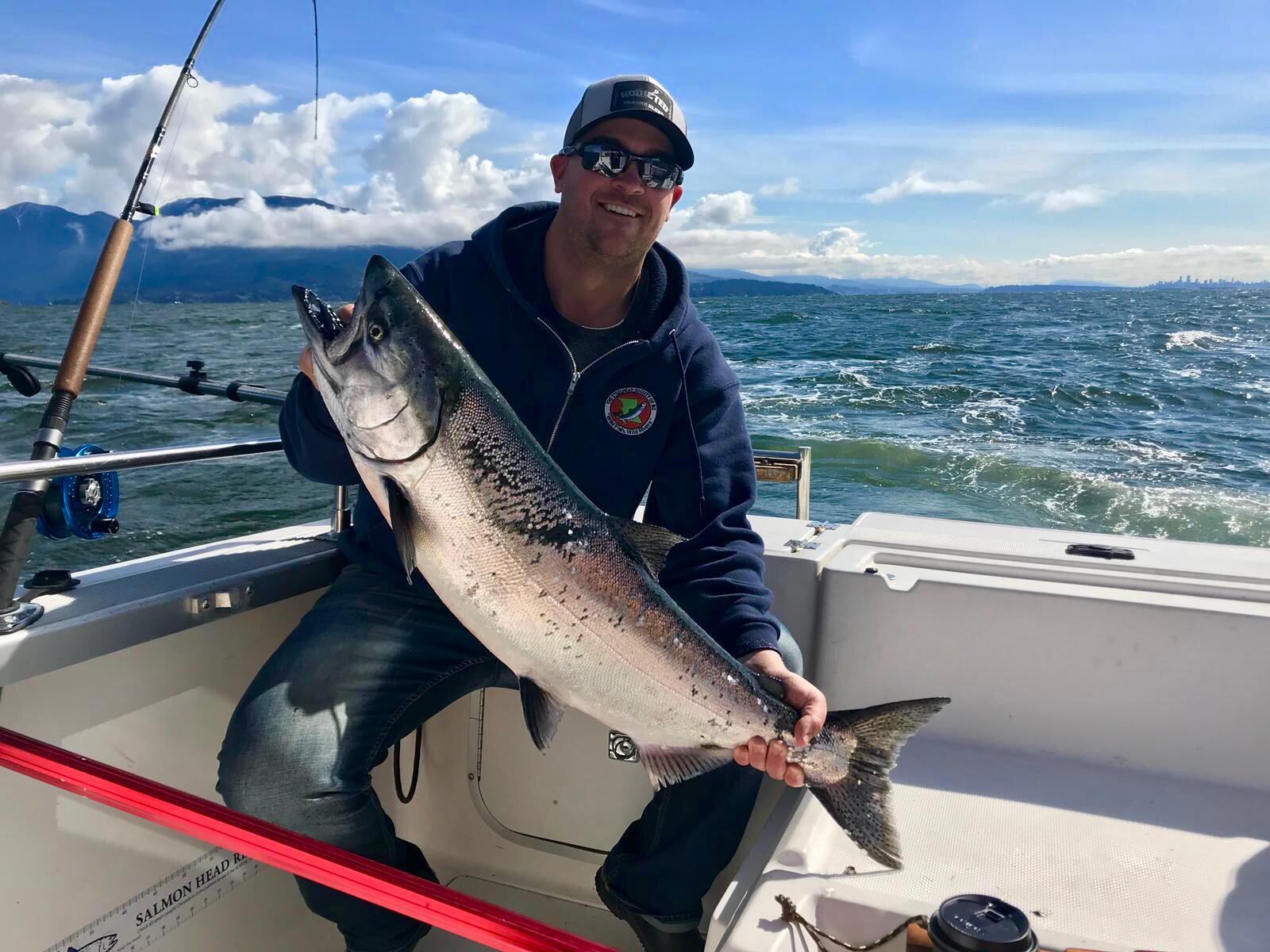 Pacific Angler customer and friend Colton with a nice sized chinook from the Hump.

There are lots of fish off South Bowen from Cowan to Roger Curtis and the Hump and QA have been good as well.  90-120 on the riggers has been good.  Nanaimo and Thrasher have also lit up and are very good but the fish are generally deeper   90-175 on the riggers.  Tackle details are in last week’s report and not much has changed since then.  If you want to head out and experience this hot fishing, give us a call at 778-788-8582 and we would be happy to take you out!

Posted on April 19, 2019 by Jason Tonelli in Fishing Reports