Finally, some calm seas for the winter chinook anglers and maybe a little sun this weekend as well.  You can see winter slowly losing its grip as we start to get more nice days on the water.  Before long, it will be sunny out and we will be complaining about the NW 35 knot winds!

Speaking of things to complain about.  As mentioned in last week’s report, it looks like DFO is going to roll over management actions from last April.  So that means there will be an announcement on April 1st that there will be no chinook retention.  They aren’t done analyzing how last year’s drastic management measures have affected the 2019 chinook returns of the endangered interior Fraser stocks.  So, looks like we are in for another round of meetings, consultation, working groups, online surveys, etc, over the next few months.   Then there will be more meetings and announcements later in May or maybe even as late as early June.  Who knows what is going to happen;  I won’t even speculate.

Keep in mind DFO could have easily allowed a 1 hatchery a day fishery in our local waters as of April 1st.  In areas like South Bowen and Howe Sound where people fish in April, May, and June, you have about a 1% chance of hooking an endangered interior Fraser River chinook and that fish will have an adipose fin.  So, if it was a hatchery only opening, you would release that fish.  Seems like an acceptable situation to me, especially considering we hook quite a few hatchery fish every day that time of year.  ENGOs like the Suzuki Foundation, Watershed Watch, and Raincoast don’t agree and are lobbying for more drastic measures, even a complete closure of fishing for chinook period.  Many First Nations are also lobbying for the same thing.  You may have seen recent media posts from some of the ENGOs and First Nations suggesting complete closures, but in case you haven’t, now you know, and they are making their positions as clear as day.  They want you off the water.  I have to say, if shutting down all chinook fishing would save these endangered interior chinook, I am all for it.  The reality is the impact our sector has is so small it wouldn’t do a thing.  I won’t bore you with the numbers, but I have poured over them for hours and we just don’t have the impact these groups are saying we have.

The government needs to make some hard and likely unpopular decisions if they want to save these chinook.  Closure of public fisheries is easy, high profile, and looks good if you are trying to please ENGOs and First Nations, but it has little to no effect when the people you are shutting down aren’t catching the fish you are trying to save.  A+ for optics, D- for results.

The solutions are there and available to them.  They need to remove seals that are consuming over 40% of the out-migrating chinook smolts.  They need to spend money on fixing interior Fraser tributary habitat which was severely damaged from fire and subsequent flooding.  They need emergency hatchery production, but facilities are already maxed out, so they need to build, and fast.  They need to have a zero-tolerance policy on the rampant illegal gill netting in the Fraser when the endangered chinook are in the river in April, May, and June.  This last one seems to be the one nobody wants to talk about.  There is a pretty big gap between the number of fish that are estimated to pass through the Albion test set fishery in the lower Fraser and what actually makes it up to the spawning beds. Unfortunately, it has been that way for years.  So, I am not talking about the Big Bar slide here.  When there are hundreds of illegal gill nets deployed in the Fraser each year it is a big problem.  The DFO officers are well aware of it and they do what they can with the limited resources and budget they have.  The reality is they need more money and more staff to pursue this issue with more vigour.  Habitat is going to take a while to fix, hatcheries aren’t built overnight, and you cant control ocean survival.  So if you want to have a direct impact on the number of chinook making it up the Fraser in April, May, and June, you need to make removal of illegal gill nets a top priority.  You have already removed the saltwater angler who hooks an interior Fraser chinook 1 in 100 fish.  Time to focus on the gill nets where every single fish in the net is one that needs to be protected.

Okay, so now that I have got that out of my system, we can talk about some fishing!  As usual for this time of year the fishing is pretty solid.  I had a few good days mid-week last week and Eddie and Derek were into some nice fish on the weekend.   It really comes down to fishing hard.  If you are going out for a quick fish, it is going to be tough.  We are putting in full days to catch these fish and fishing hard the whole time, working those riggers to keep our gear close to the bottom. 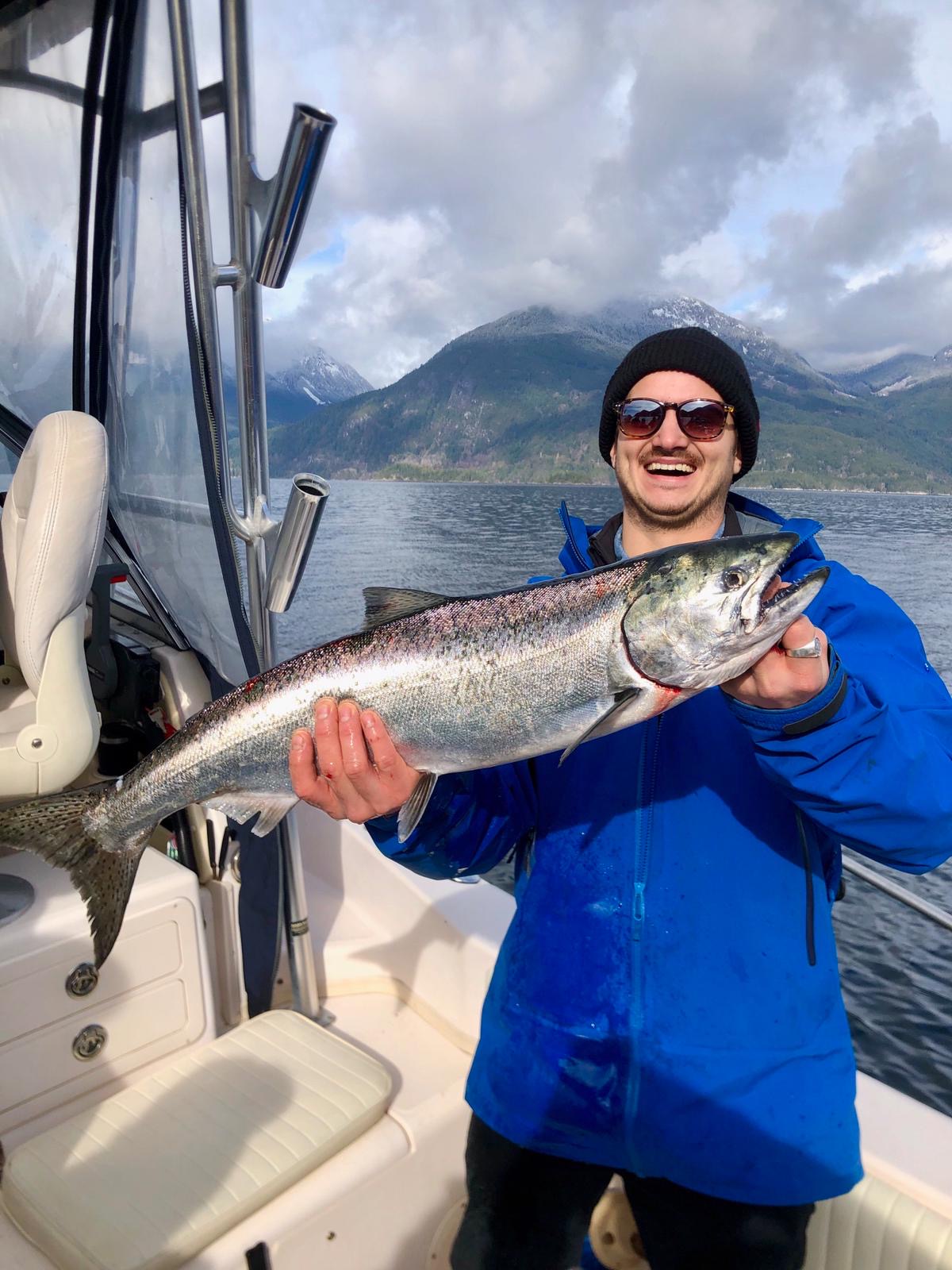 Derek’s guests with a nice winter chinook from a trip earlier this week!

One thing to notice is that we are starting to see the odd suspended fish.  We usually start to see some of the bait lift up off the bottom and some suspended chinook right about mid-March.  For now, I would still keep my gear very close to the bottom but keep an eye on that sonar for suspended bait balls and chinook arcs.

When it comes to gear, my top producers last week were “darker” flashers like the CB55 or Madi.  I was doing well with a 3.0 or 3.5 Kingfisher or G-Force spoon in Herring Aid with a 6-foot leader. 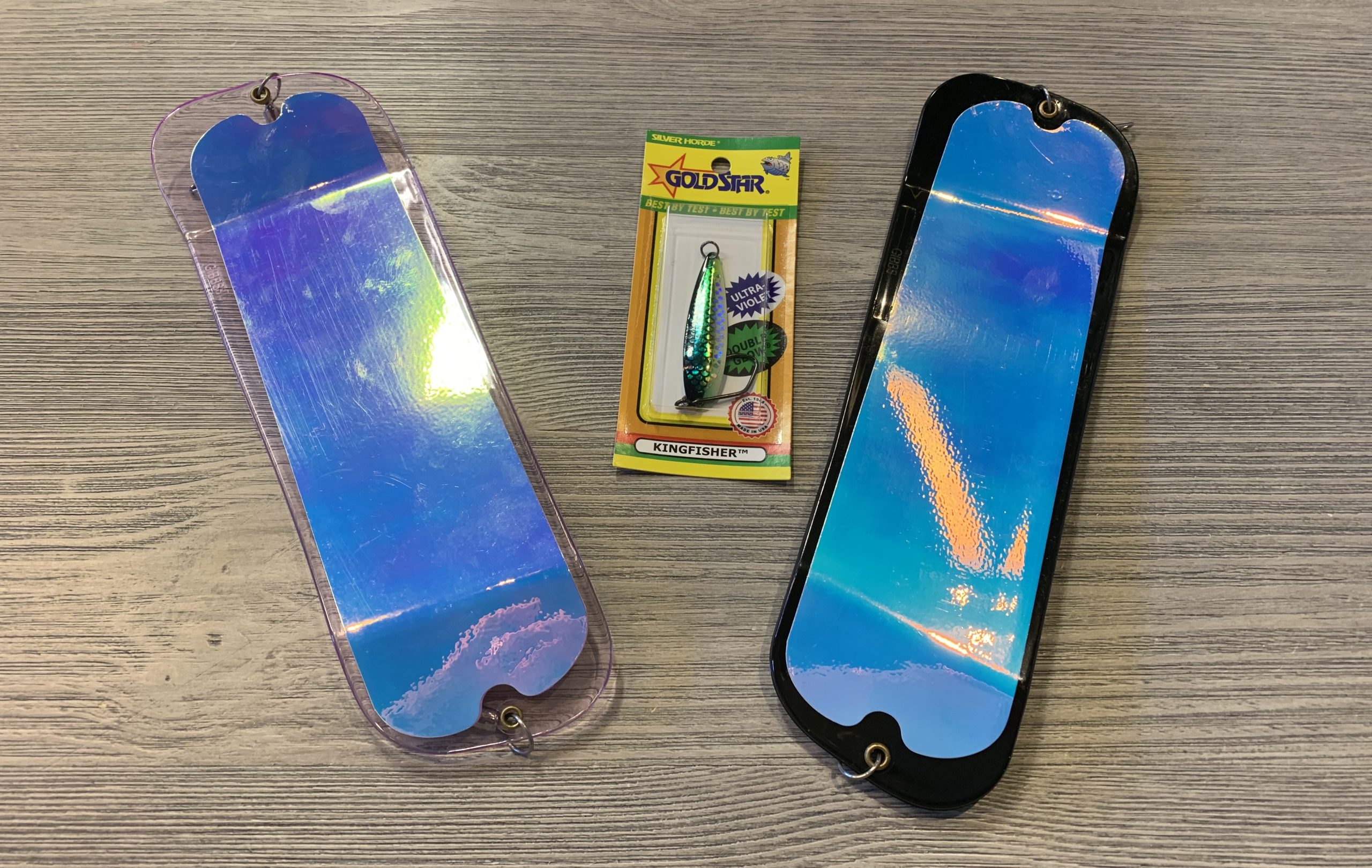 These were our top producers this week!

Prawning continues to be very good and we are dropping prawn traps on all of our trips, and will continue to do so until the commercial fleet opens up in the spring when we will switch to crab gear.

Posted on March 6, 2020 by Jason Tonelli in Fishing Reports