Last week’s report was a long one with lots of pictures, so this week is going to be short and sweet.  The fishing is good, so get out there!

Coho fishing was probably the most consistent it has been so far this summer.  We did well and so did many customers, fishing along Point Atkinson, West Van and the Cap Mouth for coho. 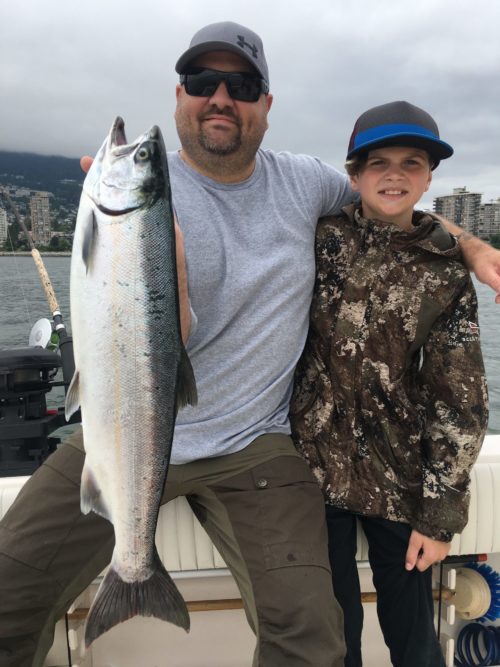 A nice hatchery coho for Courtney and son Braxton on their 5-hour trip along West Van on Thursday.

If the winds allow, or you have more time, there have also been good catches of coho from Gower Point down to Cowan Point.  Each day is a bit different with the fishing being anywhere from tight to shore in 100-150 feet all the way out to 600-700 feet of water.  It depends on the currents and where the bait is.  Tide lines and current seams are a good place to start.

I covered the gear for coho in detail in last week’s report and all the items listed there are working well.

The chinook fishing over at Gabriola up to Nanaimo has also been consistent.  On our longer trips and when winds allow, we have been making the crossing and coming back with some nice chinook.  Chartreuse, green, and blue splatter back hootchies with glow flashers have been our top producers.

If you didn’t do it last week please sign this right now, and let’s get thousands behind this and show DFO and the politicians we won’t stand for these chinook closures.  Get your friends and family to sign it as well, tell them to forward it on as your and their access to this public resource depends on it.

Petition to the Minister of Fisheries, Oceans and the Canadian Coast Guard

We, the undersigned, citizens of Canada, call upon the Minister of Fisheries, Oceans and the Canadian Coast Guard to amend the Department of Fisheries and Oceans’ 2020 Fraser River Chinook salmon management measures to acknowledge the existence of abundant Chinook stocks elsewhere on the coast and allow avoidance zones and mark selective fisheries that have been proposed for times and places where endangered Fraser River Chinook are absent or unlikely to be present, and provide details to Canadians for the immediate development of a comprehensive recovery strategy and plan for Fraser River stocks of concern to be implemented as soon as possible.

Posted on July 24, 2020 by Jason Tonelli in Fishing Reports