With opening day of September 1st fast approaching, it’s time to talk chinook.  Although the announcement hasn’t come out yet, the Integrated Fisheries Management Plan does show an expected opening as of September 1st, 2021, for 2 chinook a day, min size 62 cm, no max size, clipped or unclipped (hatchery or wild), in our local waters.  So, in short, you can fish the Fraser mouth area again and keep chinook on the morning of September 1st. Here is your Vancouver Chinook report for August 27, 2021

The bulk of the red fleshed fish, aka red springs, has passed.  Numbers usually peak later in the third week of August.   There will still be some around on Sep 1 and there will be a few white fleshed chinook, aka white springs in the mix.  The white spring numbers will increase and eventually peak late in the second week of September. 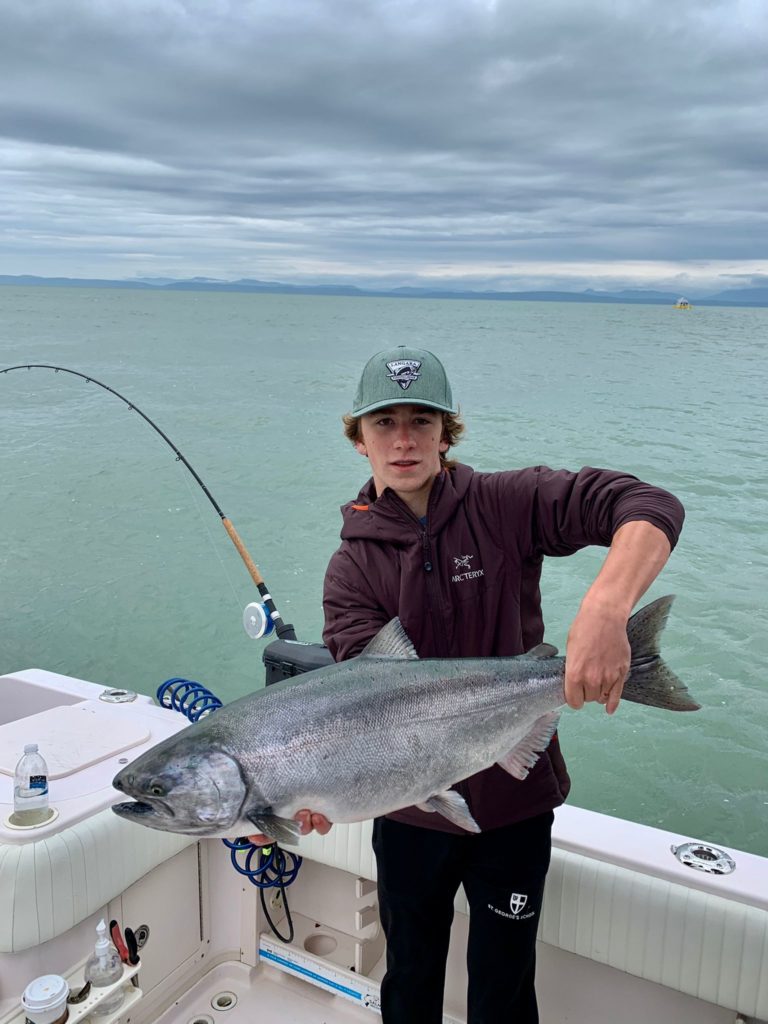 All these chinook travel fairly shallow in the water column, primarily because they aren’t actively feeding on the bait balls, usually close to bottom and are actually up in the area of fresh or brackish water, trying to find their way into either the North Arm of the Fraser or the South Arm of the Fraser and eventually their natal river.  Most of the reds are heading up to the Thompson or other rivers further afield, and all of the whites are going to 1 of 3 rivers.  The Capilano, the Vedder/Chilliwack, or the Harrison.   Both the Cap and Vedder fish are progeny of the Harrison River white spring genetics.

Effective depths for both chinook species range from 20-80 feet on the rigger, but by far the majority of the fish are caught between 30 and 60 feet.  A great way to cover all depths is with stacking, usually a 20-25 foot spread works great.  If you aren’t stacking, try 35 and 45 in the morning and drop it down a bit later in the day around 45 and 55.  A few days you can find fish deeper in the 60’s and 70’s, sometimes even as deep as 90, but again, most of these fish run shallow.

As with most salmon that are staging off river mouths, bait is a top producer.   Anchovies or herring in teaser heads are the go-to for our area.  I like Rhys Davis Anchovy Classics for anchovies or Rhys Davis Super Herring Teaser heads for larger herring like blues (medium).  On my shallowest rod I like a chrome teaser head, usually chrome green/chartreuse.  On my next rod down, I like UV Magna Green.  From there I get into the glow finishes.  My favorite ones incorporate glow, and you guessed it green and chartreuse.  There a quite a few from Rhys Davis and Oki Tackle that fall into this category.  Selection is limited right now due to demand and delays in the factory, so if you find some that have glow, green, and chartreuse in them, better grab them!  We just got an order in, and we have some very good ones, like No Bananas and Chartreuse Glow Splatter for example, so get into the shop and get some before we run out.

Some of my favourite teaser heads that I tied up early this week.

Speaking about demand, bait is in short supply and high demand.  Anchovies are pretty much gone for the most part, and some shops are charging as much as $20 a tray.  We have some right now, but I don’t imagine they will last the weekend or even the end of today.  We do have some smaller herring (reds) on the way, and they will fit into an anchovy teaser head quite nicely.  We also have some medium herring (blues) in stock with more on the way.  These work very well for chinook in a Super Herring Teaser head, which we have in stock in some great UV and glow finishes.  Just a heads up, we aren’t holding bait, we just don’t have the room.  So, if you want bait you will need to get to the shop, pay for it and take it with you.  We can’t take phone orders, payment, and then hold the bait as we need that bait to move the very moment we sell it so we can bring more in from our cold storage.

When it comes to flashers, my choices pair up with the teaser heads.  I like chrome versions on my shallowest rod with my favorite being a chrome Betsy or chrome Herring Aid or Super Herring Aid.  Next rod down I like a UV Green/Chartreuse flasher like a Green Onion or Green Onion Glow, Yellow Green Kinetic Mist, Derby Winner, or something similar.  On the deeper rods I like chartreuse and glow flashers like Glow Herring Aid, Salty Dawg, Lemon Lime, to name a few.  Again, lots of demand and limited supply, so get what you can when you can.  Luckily, we booked heavy, so we have stock on some of the top producers right now.

Do spoons and hootchies work?  Yes, yes, they do, just not as good as bait on most days.  When the fish are thick and the bite is on, you bet, they work, and you will get your fish.  On the slower days when there are fewer fish around you will be glad you are rolling bait, it does make a difference.  If you can’t get bait, or you run out of bait, fish spoons and hootchies but make sure you load them up with gel scent like Pro-Cure Gel Scent in Herring and Anchovy.

No Special Chinook Report would be complete without some politics and data.  A lot of people are wondering why we are closed in August for chinook and if we will get it open again one of these days.  Well, we are closed in August because there is a chance you might hook a chinook stock of concern.  Most of these stocks of concern are long gone by August, they usually enter the river in April, May, June, and July.  However, a few are around in August.  How many you ask?  Well in 386 samples taken in August and September, 6 of them were stocks of concern.  Or in other words, you have 1.55% chance of hooking a stock of concern.  In terms of how this shapes up to % of the expected return, you are looking at that being 0.39% of the expected return.  Of those stocks of concern, most of them would have been from earlier in August because by September most of the red chinook are long gone in general, stock of concern or not.

Keep in mind a lot of these stocks of concern are larger than 80 cm and aren’t in the Fraser Mouth area in late August.  That is why there was a proposal to DFO to open things up later, approximately August 15th, to protect the very few remaining stocks of concern.  With this later opening, that 1.55% chance of encountering a stock of concern would be dramatically reduced.  As an added conservation measure, a slot limit of 62-80 cm would protect the odd stock of concern encountered.  Imagine how small the encounter rate would be if we had an August 15th opening and a slot limit of 62-80.  A lot lower than 0.32% of the expected return, that is for certain.

Despite this, the proposal was not accepted by DFO.  So much for science, social and economic impact, logic, and your right to sustainably harvest a chinook.  Oh, one more thing, while all this is going on and the public is closed to protect those stocks as per the above information, the river is full of gill nets, legal and illegal.

Last year First Nations harvested about 25,000 chinook during legal gill net openings while the public was closed.  The year before that it was around 40,000 chinook.  This year I am not sure where the numbers will be, but in the tens of thousands for sure.  To add insult to injury, over 212 illegal gill nets have been seized in the Fraser, one of the worst years ever.  Last time I checked, gill nets didn’t select for 62-80cm size chinook, or endangered sockeye, summer steelhead, or juvenile sturgeon.

How DFO and this current federal government can micromanage the public fishery and then allow these in river fisheries and illegal fisheries is beyond me.  I am not against food fisheries, but I believe there should be some opportunity for ALL Canadians, especially those that can fish a single barbless hook and select for fish in the 62-80 cm range, at one a day, 10 per year.

Those are the facts fellow public fishers, so remember that when you head to the polls this September.  I am not going to tell you who to vote for, just that the Liberals are not interested in the public fishing sector and that they were the only political party NOT to sign off on fishing proposals specifically designed to offer public opportunity deemed low risk to stocks concern, while maintaining First Nations food fisheries.  I will leave it up to you to decide where your X should go.