As most of you know by now, sockeye is now open off the mouth of the Fraser.  Our guide boats were there opening day and all came back with sockeye, but in general the fishing was mediocre by sockeye standards.  It is definitely worth putting the sockeye gear out to target these fish, but don’t expect easy limits in the first hour or two of fishing.  It’s late in the run, the fish aren’t necessarily as keen to bite as fresh fish in mid-August, and the seiners have been scooping up the larger schools.  All that being said, there is about 900,000 fish out there by DFO estimates and if you put down the sockeye gear and put your time in, you are going to have some success.  The larger schools seem to be down by the South Arm, so if winds allow, that is your best bet. 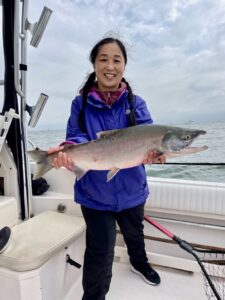 A sockeye from opening day!

Chinook fishing was good this week at the Cap Mouth, pretty much right on time.  We usually see a good push of fish right now and into next week.  With more fish on the way and no rain in the 14-day forecast, fishing should be solid for the next 2 weeks.  There are some coho in the mix as well. 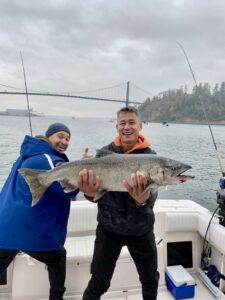 A nice Cap Mouth chinook from a trip this morning!

Off the Fraser Mouth from T-10 down to the South Arm chinook fishing has been great since opening day on September 1st.  Quite a few coho showed up this week as well, some wild, some hatchery.  Remember to release those wild coho carefully at the side of the boat and the limit for hatchery coho is 2 a day, min size limit 30 cm.  Combined salmon limit of all open species, such as sockeye, chinook and hatchery coho is 4. 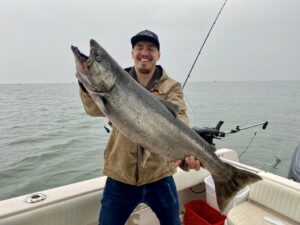 There were some strong test sets at Albion on the 8, 10, 12 of September so we are probably nearing peak migration of the fall chinook run.  Most of these fish are white fleshed chinook heading to the Harrison and Chilliwack/Vedder River.  There are still some reds around but the vast majority are now whites.  Fishing should be good this weekend and into next week and then the chinook numbers will fade off but coho numbers will remain strong.

See you in the shop or on the water

Posted on September 16, 2022 by Jason Tonelli in Fishing Reports