September brings us a unique time of year: there’s still fish to be had off of the Fraser, with the chinooks transitioning to coho, along with a few chum.  Though still pretty early, there have been a few reports of chum being caught by anglers down at Sandheads.  Coho numbers should increase as September turns into October. The rain this week will move fish up the rivers but at least as we are writing this report the fishing continues to be good.  With dry weather espected for  next week, we should have a few more weeks of good fishing.

Bait is still key, and is always a great choice when targeting river mouth salmon.  That said, when it does turn into a coho fishery, your white hoochies will come in handy.  Standard glow and UV teaser heads in all your favourite colours are still the ticket.  UV and Glow flashers in chartreuse, green, and purple are all popular pairings as well.

Depths are still in the top 60ish feet, but don’t be scared to go a little deeper when the tide is ebbing, as fish will often sit down below the heavy outflow from the river. 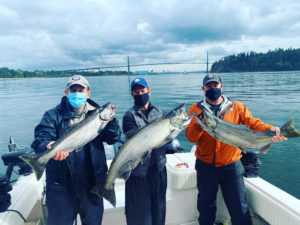 As stated above, it is September, and that means the Capilano fishery will be starting up. There have been some good reports from anglers who have been fishing the Capilano, with reports of chinook and coho providing a mixed-bag of catches.  Be careful of the shipping lanes, and be respectful of the direction of the tack.

Bait is still a great choice, and will be taken by both the coho and chinook.  This fishery usually fairs better on the flood, with fish often times being found farther West and off-shore a little more during the ebb.

This is also a great time of year to check out the Bell Buoy and Mile Markers.  Fished on the flood as well, it provides a second choice if the Cap mouth is too congested.  There have been some good reports from anglers who have dropped in and worked the contours, working their way back and forth along the different depths.  Working the contours until you find which shelf they are on can often be the key, with one contour sometimes being ‘the one’.  Watch out for crab traps if working this area is it can sometimes be like a mine field.

Posted on September 25, 2020 by Jason Tonelli in Fishing Reports