We are heading into the second week of October now and fishing for migratory fish is starting to slow down. Not much to complain about though, as the lack of rain in September and October kept the chinook and coho around for about as long as possible, resulting in some great fishing during the past 5 weeks.

There are still some mature chinook and coho around, but the big pushes are heading up the Fraser. The same can’t be said for the Cap fish, as the river is extremely low. There are still decent numbers of chinook and coho stacked up off the river mouth. They are getting a little harder to catch, as some of them have been there for awhile, but there are also some fresh fish in the mix. As usual, for the Cap Mouth at this time of year, bait fished close to the bottom is the top producer. With no rain in the 7-day forecast, this fishery will continue to produce this weekend and into next week. 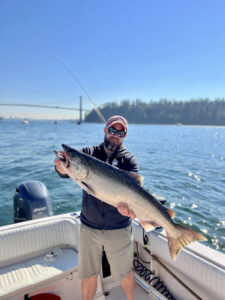 The Fraser mouth has slowed down for sure, with the last of the sockeye heading up the river and the big pushes of fall chinook also heading up. There will be the odd late chinook around and decent coho numbers for a few weeks.

Anglers are already starting to target feeder chinook, aka winter chinook, in Howe Sound and the Gulf Islands. It seems this fishery is getting better or at least more consistent each year with this year being no exception. It’s a long season, basically Oct 1 to March 31, so no need to rush out there quite yet. However, if you want a change of pace from the Cap or Fraser Mouth, there are some feeders around.

Posted on October 7, 2022 by Jason Tonelli in Fishing Reports