It doesn’t look like it is going to be a very nice weekend out there!  Big SE winds and lots and lots of rain.  If you are hardcore and you want to chase down some winter chinook and prawns this weekend, you will probably have the place to yourself for the most part.   Bring your rain gear and maybe a heater. 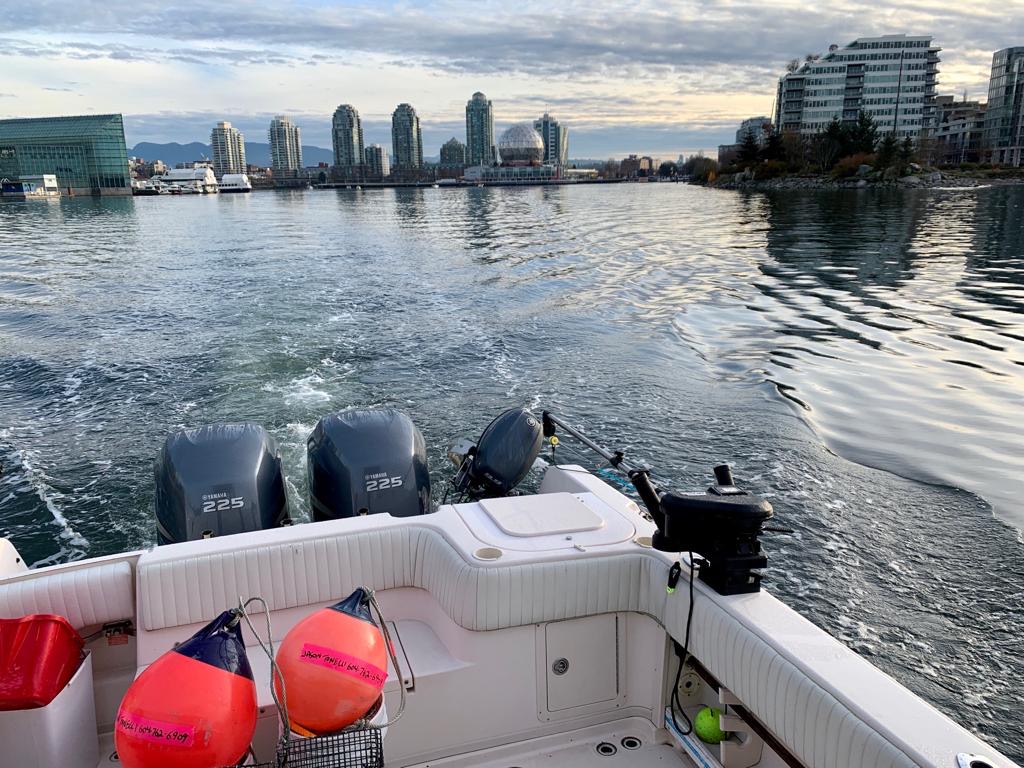 We had some beautiful days on the water this week but the rain looks to be coming for the weekend!

Luckily we were able to get out earlier in the week when it was flat calm and sunny.  We got into some fish but we had to work pretty hard for them this past week.   There also doesn’t seem to be as much bait around, which is likely why the fishing was a bit slower this week.  You know how it goes, find the bait, find the fish.  Our best producing setup this past week was a black flasher, like the CB55 or custom black Pacific Angler flasher, paired up with a Kingfisher Herring Aide spoon in 3.0 or a G-Force Herring Aide in 3.0.

We had the Lower Fraser Valley Sport Fish Advisory Board meeting this week and there was a lot covered, but lets focus on early run chinook, as this is the big issue.  As you all know, the early run timed Fraser chinook are at extreme low numbers and not much has changed there.   I expect we will be in for the same fight this coming year to keep the marine waters open from April to July.  The science shows that less than 1% of the time we are encountering those specific stocks off areas like South Bowen and Howe Sound or over at Thrasher and Entrance.  Closing down chinook fishing in those areas is completely political and is simply a move to appease and manage First Nations who want to gill net the Fraser during that time period.  The reality is this.  DFO knows we don’t catch those threatened Fraser stocks but they shut us down and won’t even allow a hatchery only fishery.  They close us so they can show FN that we are closed and in turn they can then impose more restrictive regulations on FN in river gill netting.  That’s the truth of the matter.  Not based on science and not based on logic.  Science and logic would dictate if you aren’t catching the stocks of concern and in fact you are catching stocks that are actually doing quite well (also lots of US bound hatchery fish) you should be open.  Right?  Of course, but this is the problem with how DFO manages the resource.  They shut down one user group to manage another.   At this past meeting the recreational angler was well represented and the message to DFO was loud and clear.  This management style is not acceptable and at the very least there should be a fishery for hatchery fish and we need to transition to clipping all our hatchery fish now.  We will see how this plays out, but the best thing you can do in the mean time is join organizations like SFI as they are pushing DFO hard for science based decisions and they need your support.   I will be at the SFI Conference today and senior DFO staff will be there and presenting.  I will report on how that goes in next weeks report.

In the meantime, stay dry, tie some leaders, and get ready, as the fishing should pick up next week when the winds die down and we are done with the full moon.

Posted on November 15, 2019 by Jason Tonelli in Fishing Reports