May 7th, chinook all around, no opportunity for hatchery retention in Vancouver.  Absolutely criminal.  To make matters more offensive, on recent trips I have been catching a lot of hatchery chinook.  To me it feels like more than previous years, which would make sense as WA did have increased hatchery production these last few years and I think we are seeing the effects of that.

As Chair of the Lower Fraser Valley Sport Fish Advisory Committee to DFO, I have been in almost daily contact with decision makers.  They are working on it.  I was hoping for an announcement this week yet was told last night there are delays, from unrelated issues, and we won’t see anything till next Wed at the earliest.

Considering the goal was an April 1 announcement of some sort, good or bad, this timeline is frustrating and quite honestly unacceptable management of a public resource.  Do you think DFO would take 6 to 7 weeks in season to make announcements on commercial or First Nations fisheries?  Never, so this is a fairly good indicator on the lack of respect that DFO has for the public fishery, in general, in my opinion.  Fortunately, we have groups like the SFI and PFA that are pushing and lobbying for better.  The only way we can have change is with public pressure, so if you fish in Vancouver or the ocean in general, follow and support those 2 groups.

Back to the fishing.  I was over in the Gabriola region on Wednesday for a charter.  We got a ling, some rockfish and then decided to fish Thrasher for chinook.  The Thrasher area is open for non-retention chinook fishing.  For details, consult our past blog posts that have maps of the current regulations.  Fishing was excellent, we fished salmon for 2.5 hours and were into all sorts of chinook including a few double headers, with lots of hatchery fish around. 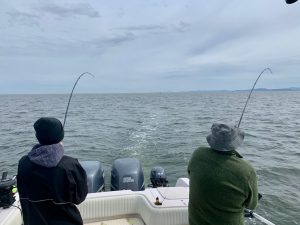 Although I was hitting fish as shallow as 117, it seemed the bigger fish were deeper, and I eventually settled in at 177 and 188 on the riggers in 250-350 feet of water.  Productive setups were a Lemon Lime with a 3.5 Irish Cream and a Salty Dawg with a chartreuse splatter back hootchy.

Posted on May 7, 2021 by Jason Tonelli in Fishing Reports