Fishing activity has certainly picked up this past week as the weather warmed up and the winds dropped down for the most part.  Not much has changed, and by that, I mean there are still some good numbers of fish around, as has been the case for 4 months now.  Seals also continue to be an issue but if there is one good thing about more boats around, is that it gives you a better chance at landing your fish among the pack. 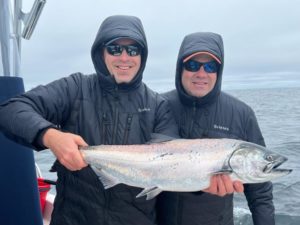 Jason and Don with a healthy winter chinook from Wednesday

Probably the one stand out piece of information this week is Vancouver Harbour.  I saw pictures of some nice fish taken there and had some decent reports.  So, if the fog or winds have you staying closer to home, give it a try.  Some fish are hanging around the Bell, the Freighters, and the Cap Mouth.  Not unusual for this time of year and this can fish well right into late March.

When winds have allowed, there has been some good fishing in the Gulf Islands.  It’s a long haul on these shorter days, especially if you are dropping prawn gear, so this destination is best saved for those flat calm days when you can really cover some ground.

Note that there were some more glass sponge reef closures announced for Howe Sound, but they aren’t in any of the major fishing spots.  I don’t think they have been updated on the Navionics charts yet, but make sure to check the regulations before you head out in case it affects where you drop your prawn traps.  Also, note that DFO has been out on patrols a lot, as has VPD Marine.  They are checking for licenses, barbed hooks, safety equipment, etc.  So, make sure your flares are up to date, your licenses are printed off, your barbs are pinched, and your fish are recorded.  If you break the rules, it reflects poorly on the rest of us and they try and use this against the public fishery when making policy.

Make sure to follow us on @pacificanglersportfishing on Instagram for mid weeks photos, info, and pictures of the hot gear.

Posted on January 28, 2022 by Jason Tonelli in Fishing Reports