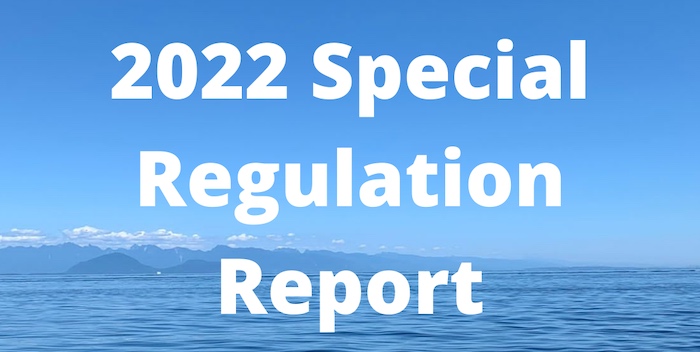 Well, how tragic is this?  I am writing the fishing report on April 1st, the day our area shuts down for fishing for chinook.  Let me be specific, as per the fishing regulation notices that came out last week and are now on the DFO regulation website, you cannot target chinook salmon in the vast majority of our local waters.  There aren’t any coho around for at least a few months, so that pretty much shuts things down for the public at large until later in the summer.

To make matters even more painful we are coming off what has undoubtedly been the best winter chinook season in most people’s lifetime.  It started in October with gusto and it never really stopped.  We had good to epic fishing pretty much all winter long with perhaps only the odd slower week in late Jan and early Feb but things certainly closed out strong here in March.  In short, we have never seen so many winter chinook in the Salish Sea.

To add even more insult to injury are the vast amounts of hatchery chinook around and DFO’s unexplainable inability to put forward proposals that would allow us to safely harvest hatchery chinook this spring with little to no impact on stocks of concern such as interior Fraser chinook.

What the future holds is unclear.  The “new” Fisheries Minister has received information these past few weeks that clearly shows there are regulations she could put in place to allow Vancouver area anglers to fish for hatchery chinook, in particular in Howe Sound, while easily protecting stocks of concern.  This info has been presented to DFO the past few years as well.  There have been countless meetings of the Sport Fish Advisory Board crafting these science based proposals and groups such as the Public Fishery Alliance and Sport Fishing Institute of BC have been advocating hard for these proposals to be accepted, as have individual anglers.  In fact, SFI was in Ottawa this week, pushing for public access and balance.  Locally the decision was made not to demonstrate or rally this year because of Covid, but believe me, there has been some serious advocating and lobbying going on.

At this point, if proposals aren’t accepted here in short order, it is crystal clear that Justin Trudeau, Joyce Murray (Fisheries Minister) and Rebecca Reid (DFO Regional Director General, Pacific Region) have no interest in science-based decisions and a balanced management approach that respects all Canadians’ rights to harvest chinook in a sustainable manner.

I mention these 3 people in particular, because they are truly the ones that can make things happen.  Many people within DFO see the data, understand the fishery, and agree it can and should be open.  The problem is not at the bottom or middle, it is at the top, and these people need to be held responsible for what is in my personal opinion a gross mismanagement of a public resource.

Somehow, the advice and science make it up to the top but nothing changes.  That’s because it increasingly has less to do with science and more to do with the lobbying efforts of environmental groups and First Nations.  That is politics.  Those are the facts, cut and dry, black and white.  All we are asking for is balance, because right now 95% of the population has 0% of the access to even hatchery fish.  That’s just not right.  We can have very modest and sustainable access to hatchery chinook while protecting stocks of concern and respecting First Nations priority access to chinook.  It’s not hard, the proposals are clear it can work, it’s the lack of political will and respect for the public fishery that prevails.  Remember that next time you vote.

So, what do you do now and where is the next place you can fish?  Well, if you want to run across to Gabriola and fish there up to Entrance, it is not closed to fishing for chinook, just to retention.  You can practice catch and release.  The fishing is always amazing here April, May, and June for chinook.  Bottom fishing will open May 1st and chinook will open for retention July 15th.  Always check the regulations before you head out in case things have changed.

On this side of the pond there seems to be the ability to fish for chinook catch and release along West Van shoreline and deep up in Howe Sound.  Consult the regulations for Area 28 and 29 and you will see what I mean when you click on the restrictions and look at the maps.

The coho will show up around South Bowen in June, and also off West Van into July and August.  There are coho around earlier off West Van, even as early as April and May, but they usually are hard to catch as they zip into the Cap if there is any flow.  Consult the regs to see which areas are open for coho and when, as it changes between Area 28 and 29.

For chinook, we will probably see it open July 15 NW of Gower Point and then later in August along W Van and then hopefully off the Fraser Mouth for Sep 1.  We will have to wait and see.

What about sockeye you ask?  That is up in the air as well.  Although this is the big run year, ocean survival has been modest at best for most salmon species.  There were a lot of small steelhead this winter and that is not a good sign of offshore survival and food levels.  Steelhead are thought to hang out in similar offshore waters where the sockeye are so we will have to wait and see how many sockeye comeback in August.  There is also the issue of the proposed SRKW sanctuary off the Fraser Mouth.  If the DFO choose anything other than status quo you will see regulations that will severely impact your ability to fish off the mouth of the Fraser for sockeye, chinook, and salmon in general until October 1st.

What does this mean for charters?  If you are heading out on a charter with us fishing is good.  In fact, it is likely going to be some of the best chinook fishing you have ever experienced.  We have a permit to collect chinook DNA and hopefully this data will further bolster the evidence that we should be open. Don’t forget the crabbing and prawning, as we will be doing that as well. So, all in all, an epic day of chinook fishing with some crabs and prawns in the best city in the world is still pretty amazing.  Hopefully, one day soon, we can keep one for the BBQ.  As the regulations come out and the coho come in you can bet we will be in the right place at the right time to put some fish in the box for you.

Until then.  See you in the shop or on the water…

Posted on April 1, 2022 by Jason Tonelli in Fishing Reports