Well here we are again.  It’s the middle of April with excellent chinook fishing in our local waters and no opportunity to retain a chinook, not even a hatchery fish. Here is your special chinook report for April 16, 2020 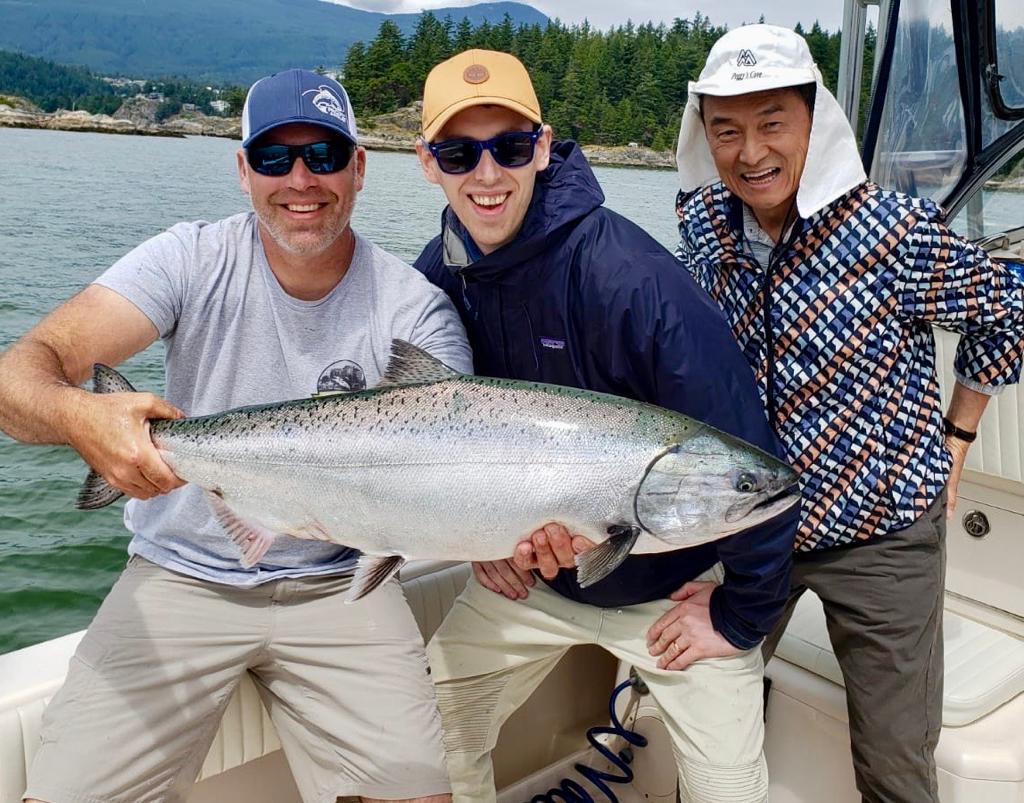 Here are the facts.  Yes, there are some chinook stocks that are in trouble.  Primarily the ones that go in the upper reaches of the Fraser and enter the river in April, May, June, and July.  They spend 2 years in their natal streams.  These stocks are called 4.2 and 5.2.  The first number is their mature age, the second refers to how long they stay in the river before out migrating.  Are these stocks in trouble, you bet.  Their spawning habitat has been severely degraded by forest fires and subsequent flooding and siltation, they face hundreds of illegal gill nets in the Fraser, they have to get past the Big Bar slide, and when these 2 year old smolts out migrate up to 47% of them get consumed by seals if not more.

Yet other rivers had excellent chinook returns last year, but you don’t hear about that from  the Department of Fisheries and Oceans (DFO) or the media.  A few examples; the Campbell/Quinsam had 7,500 and was open for retention for the first time in 35 years.  The Cowichan had 13,000 with a 12-year average 8,600.  The Puntledge had 16,500 which was two and a half times its 12-year average of 6,700.  Not to mention the tens of thousands of chinook that returned to the Vedder/Chilliwack.  These rivers are a big reason we are having such good fishing in local waters. 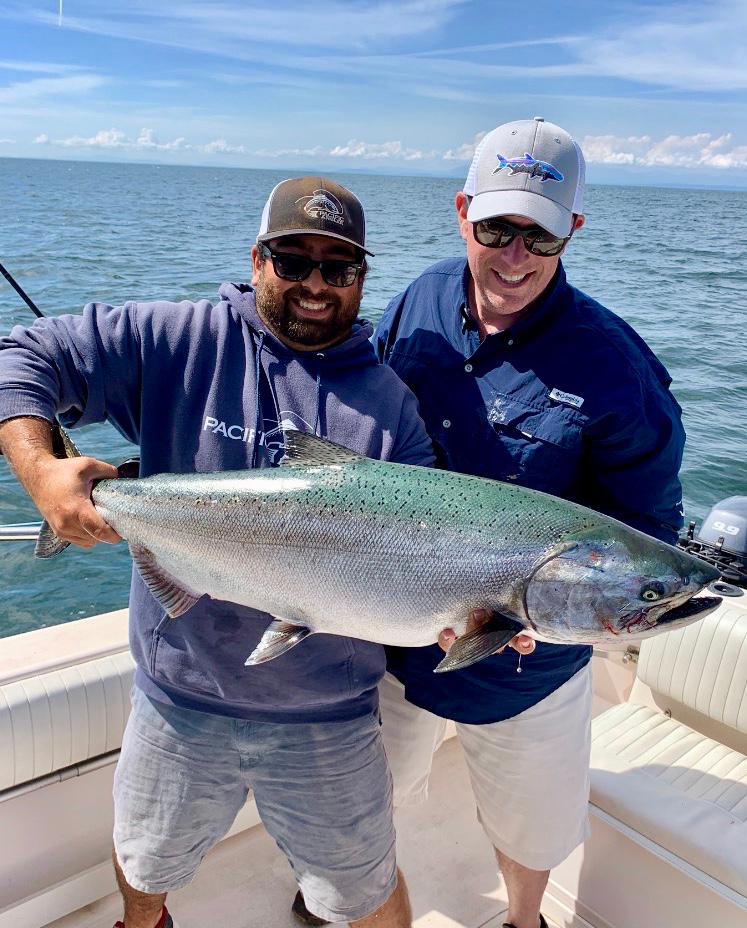 A big hatchery chinook hooked at the entrance to Howe Sound in July.

So why the blanket closures?  How does the public fishery play into it?  Do we hook endangered stocks in our local waters, and should you be concerned about that? I have the answers to these popular questions, so keep reading.

Well here are the facts from DFO science when it comes to percentage of these 4.2 and 5.2 endangered chinook in the Georgia Strait South chinook catch in 2018. 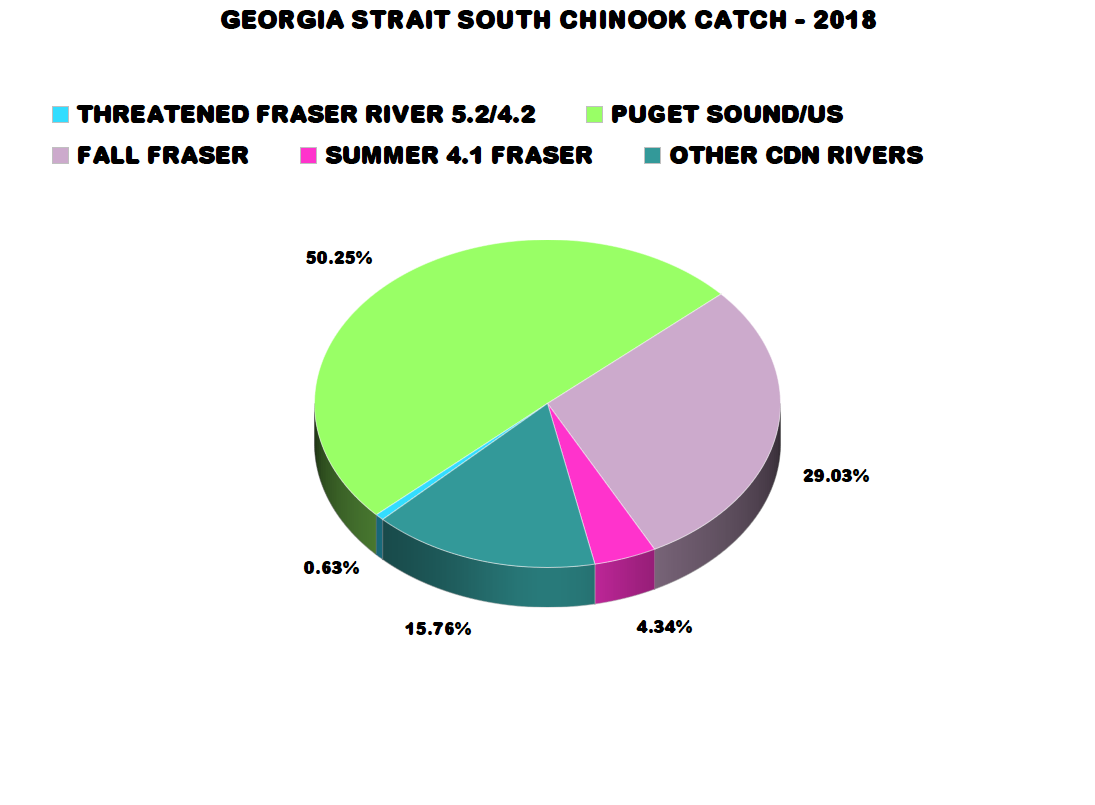 So no, the public fishery is NOT the reason these fish are in trouble.  The current blanket closure for the South Coast is completely unnecessary and will not have any meaningful impact on the recovery of these 4.2 and 5.2 chinook stocks.  In April our local waters like Howe Sound and South Bowen should be open for two chinook a day, marked (hatchery) or un-marked (either wild or unmarked hatchery).  You could argue the same for May, June, and July as well, or you could allow one a hatchery fish a day.  You could start marking all of our hatchery production and have a hatchery only fishery.  You could also allow specific areas to be open where the data shows there is 0% chance of encountering stocks of concern or how about 1% or less?  Surely that is an acceptable risk when you measure the social and economic impact of a complete closure.

So, what’s the next step?  Well the Sport Fish Advisory Board, the body responsible for proposing fishery management plans on behalf of the public fishery, has been crunching the data to find opportunities where a public fishery should be open based on little to no impact on stocks of concern.  Here is a link to the proposals put forward to DFO for consideration.

For Howe Sound details go to pages 13 and 14. In short, we are asking for one hatchery fish a day April to mid-July.

For Southern Gulf Islands go to pages 11 and 12.  Same ask here, one hatchery a day April to mid-July.

DFO is accepting feedback on these proposals now.  We need letters of support by Monday, April 20th at midnight.

It doesn’t have to be long, one paragraph will do.  I know you wrote letters last year, and we need you to do it again.  This consistent pressure is the only means to change.  We can’t do it without your letters.  Yes, you, the person reading this email, please help and let’s get our public fishery back!  It is only through public pressure that DFO will adopt these proposals and transition into mass marking of all hatchery produced chinook.

There is no doubt that the future of the South Coast public Chinook fishery in BC will be dependent on the DFO response to the proposals put forward by the SFAB. Recovery of Chinook stocks of concern is not a short-term proposition. Without broader application of Mark Selective Fisheries (MSF) and the acceptance of additional data supported fisheries, the future for the public fishery is in peril. The public fishery needs stability and certainty. Without either one, anglers and businesses will continue to suffer.