You can see spring is here, still the odd cold morning, but the afternoons are heating up into the teens and the cherry blossoms are coming out around downtown.  Spring is in the air, and this means we start to see more fish around as well and some suspended fish as the algae in the water makes it a little darker and the bait comes up and so do the fish.  This past week, there has been decent fishing all through Howe Sound, in the Harbour around the freighters and the Bell Buoy, further up the Sunshine Coast and over in the Gulf Islands.  In short, its go time.

“Derek and crew getting it done yet again earlier this week on Reel Therapy!”

Some of the reports have been very good and I am fully confident we are about to enter into the same scenario as last year when the fishing was excellent in April, May, June and July and there was no retention of chinook.  When I think about this, I literally get sick to my stomach.  Once again DFO is managing a sector that encounters chinook stocks of concern less than 1% of the time and once again, we are wasting the socio and economic opportunity to go out and harvest a wild chinook salmon or even a hatchery chinook salmon.  I would love to say there is a big rally planned to show DFO and the rest of this country that the common resource is being miss-managed, but with Covid-19 that is not going to happen.  There will be some different efforts coming up and don’t underestimate the power of a letter.  But for now, let’s focus on family and health and the fact that you can keep 2 chinook until the end of the month. 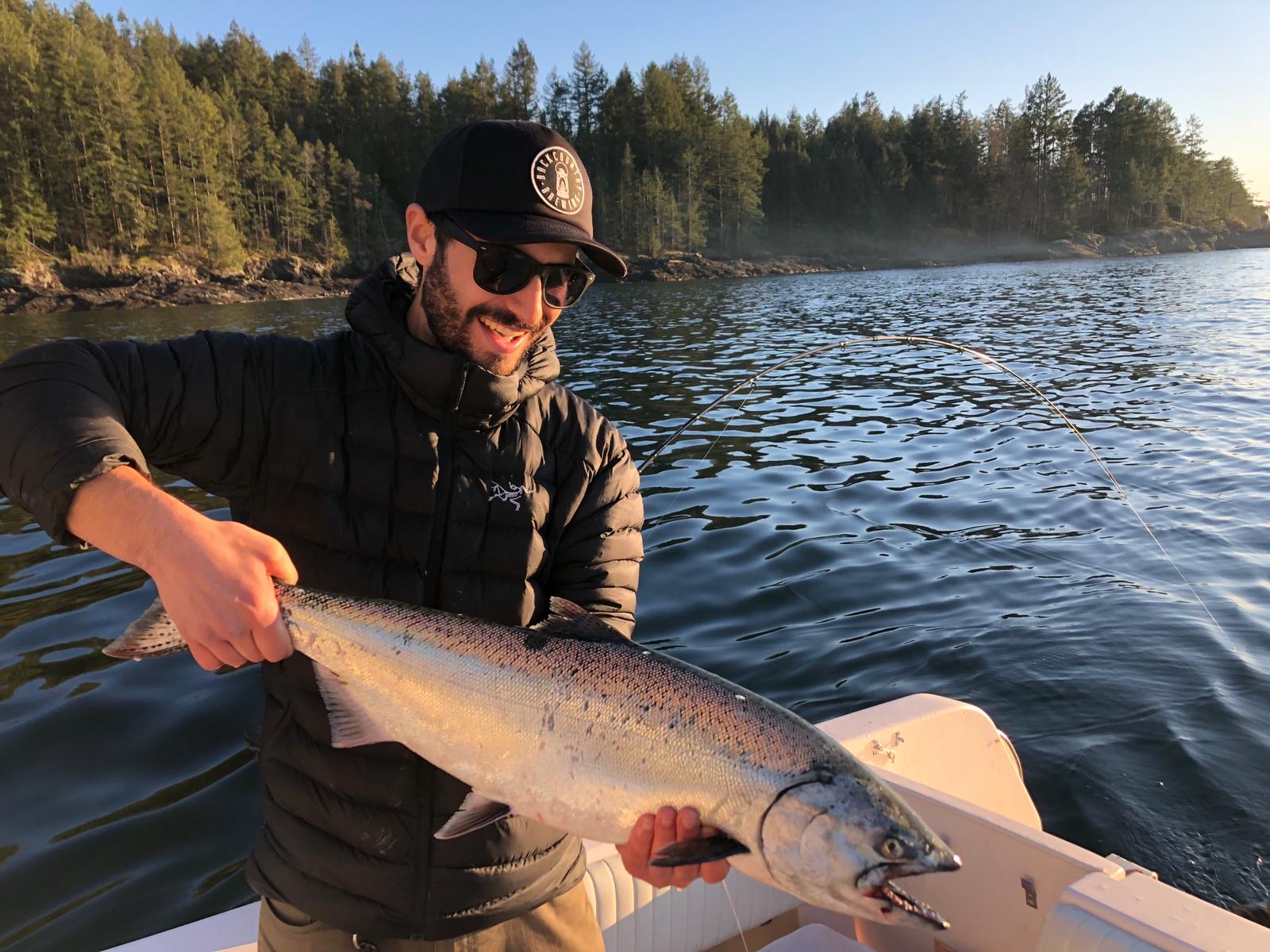 This time of year, things can get a little tricky as you do get some suspended fish as mentioned earlier.  One day the fish are on the bottom, the next day you get them off the bottom a bit, or even in the same tide.  So, make sure you keep a keen eye on the bait positioning and where the arcs are.  This is where good electronics make a big difference.  You may try stacking on one rigger to cover more water and keep one rigger at one rod only making it your dedicated just off bottom rod.  As for gear, the brighter gear often works the best in the darker water that is tea stained from algae.  Glow green or glow chartreuse flashers and glow green or glow chartreuse spoons and hootchies are all top producers.  I am going to do a post of some of my favorites later on this afternoon when I go down to the boat to get ready for some trips this weekend, so make sure you follow @pacificanglersportfishing on Instagram or FaceBook.

I am happy to report crabbing seems to be pretty good, so we are going to drop crab traps on our trips now.  Prawning continues to be good as well, but it will taper off a bit as the days are getting nicer, longer, and more boats are starting to head out each weekend.

The boys from Reel West Coast also have a treat for you.  They don’t usually do this, but they have decided to release Episode 1 of this year’s Season 3 on YouTube.  This show just only recently came out on TV, so would not normally be released to the public on YouTube, but they figure we could all use something to cheer us up.  So, if you haven’t already seen it, check out this show of Brendan and me fishing the South Arm for strong runs of summer chinook in August.  I am hopeful we will have good fishing again this August and that gives us all something to look forward to in this difficult time.  Enjoy…. Vancouver Fishing Frenzy!

See you in the shop or on the water

Posted on March 20, 2020 by Jason Tonelli in Fishing Reports