Not much has changed these past few weeks.  Winter chinook fishing has been pretty steady. You know the drill, put in your time, cover some water, find the bait, find the fish.  Prawning has been very good and the number of egg bound females has been 0% on our last few outings.  So, if you like prawns, bring your traps.  I thought we would do a special feature this week for a change.  As many of you know, plugs are a great choice for winter chinook.  They are fun to fish as you get to troll fast, cover water, and you fight the fish without a flasher. For winter fishing, these are all good things and the aggressive feeder chinook respond well to plugs.  So, my friend Scott asked if he could pass on some of his plug knowledge to our readers and I thought it was a great idea.  If you fish our local waters you will have seen Scott out there in his 282 Sailfish and he fishes plugs as much he can throughout the 12 month chinook season with great success in our local waters as well as the Gulf Islands.  He pretty much exclusively fishes plugs in the winter.  So please enjoy our guest feature by local angler and plug aficionado, Scott Betts.

As vinyl records make a resurgence in mainstream music so to should the Tomic Plug in the avid angler’s saltwater arsenal.  Unlike vinyl records which haven’t changed much since they were introduced, Tomic has made many advances in their lure applications that make for effective temptations that salmon have a difficult time resisting.

The aspect that attracted me to the idea of fishing Tomic plugs was the fact I could ditch the inline flasher.  I could now begin to appreciate the true power of a chinook salmon without an underwater rudder hampering their every move.  Truth be told I had only limited experience with chinook jumping until I started fishing plugs now it’s a regular occurrence.

In my pursuit of this method of fishing I learnt a lot and still continue to learn.  I talked to guides, watched tutorials, spoke to vets of the saltwater scene, and did lots of research.  I now want to share that with the fishing community.   I should preface that these are the methods I use and are focused on the Howe Sound and Gulf Island fisheries.   So, let’s jump into it… 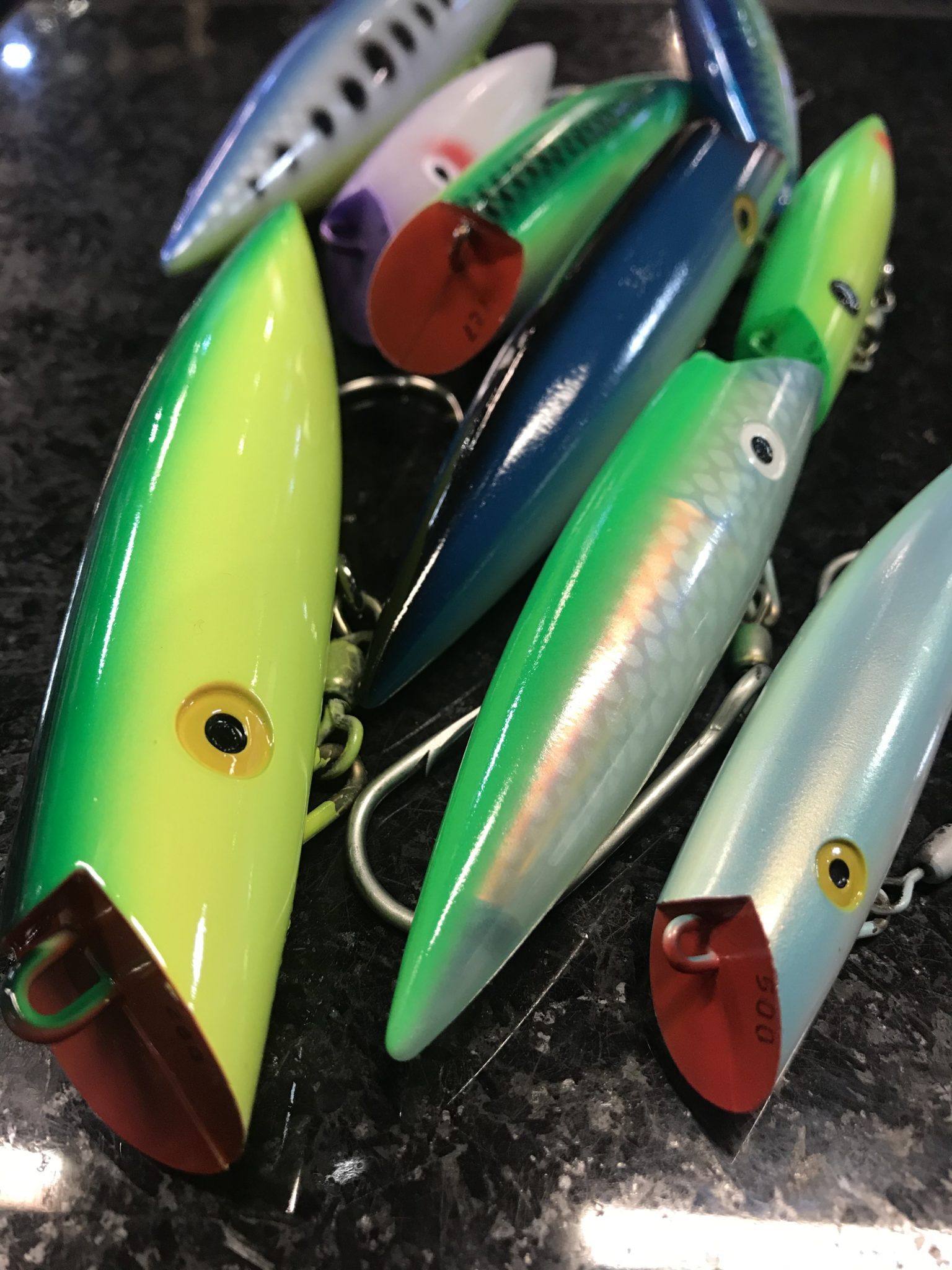 Winter Fishing and the Clear Waters of Howe Sound

I spend a lot of the late fall and winter months up Howe Sound.  The bait that makes Howe Sound home in the winter months tends to be on the small side and most anglers fishing traditional setups use 3.0 to 4.0 spoons or small anchovies.  When it comes to plugs, I fish the size ranges of 4” Classic, 4” Tubby, 5” Classic and in the later months as the bait tends to get bigger the 5” Tubbys come out.

As for colours and styles I tend to focus on three primary colour sets in 2 different styles.

The first, and probably the most popular of Tomic’s plugs, the 602.  I run this in its classic form but also heavily use the 602uvbiid.  I find the latter works well on brighter days and clearer water as there is a reduced glow effect and more uv flash.

The second style is the 632.  The green and white is a familiar colour pattern with Vancouver anglers. 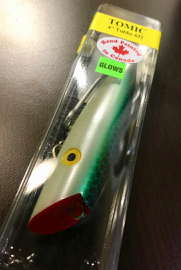 And the third the 645 or Tomic’s version of the Herring Aid colour set.  Again, the 645uvbii is a good option on those brighter days or where the water is crystal clear.   If you’re an avid glow angler then add a glow belly stripe to the 645uvbii.    I should note Tomic is extremely accommodating to customization so speak to the staff at Pacific Angler about minor tweaks. 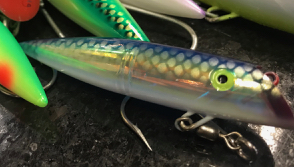 Thrasher, the Grande, and Entrance

Ok now let’s talk about across the pond in the Gulf Islands.  The colour profiles as many of you know shift a little.  Some of the same works but I have had more success focusing more on the dark green and blues (my experience).   I still like the 602s and the 645s but I tend to go to the 415uvb 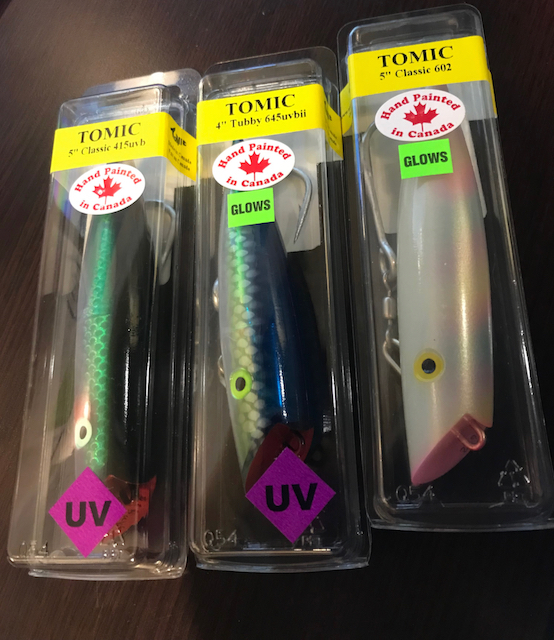 Plugs fished along the bottom tend to attract the lings as well so those looking for a bit of white fish, when they are open, will have success.

The Spring Herring Spawn in the Gulf

For those that fish the Gulf Island, specifically the Nanaimo area down to Porlier Pass, will be well aware that in late February to the end of March there is a herring spawn.  These big spawning herring are a delight for salmon in the area.  I know many of us who examine the stomach content during this time of year often find herring up to 8” in size!  This is the time to bring out the bigger plugs.  5” Tubbys, 6” Classics, and 6” Tubbys are often the go to, I even have a 7” in the box that has seen the water on occasion.   The name of the game match the forge fish and they are much bigger during this time in this location.

Now that we have covered colours and sizes let’s talk about something many new plug enthusiasts fail to do; separate your swimmers from you non-swimmers.   When I first started fishing plugs, I remembered visiting eBay and thinking, I can get a good deal on used plugs.  After speaking to a few other anglers and an ex commercial troller I quickly found out why…these ones don’t swim, well they swim but not in a way that entices bites.   Like many lures, certain ones just work.  A big tip here is keep track of which ones are catching and when you figure you have a dud, well, they make a great key chain that floats or a gift to someone you wish to out fish in the future.

Being selective will help dial in your arsenal, to include effective swimmers, leaving you with only size and colour decisions to make.  It can be frustrating as these lures aren’t cheap but they are durable and hold up a lot longer than other alternatives so the cost will average out.

The Setup (To Pull the Pin or Not, that is the Question)

One of the most debated topics with plugs is whether to pull the pin.  When I refer to the pin, I mean the tow bar that is embedded from the factory

My opinion is 100% yes to pulling the pin.  The reason isn’t that I think it fishes better, I don’t have the evidence to support one way over the other.  My rationale is, if you break off on a fish or more likely in our waters, get sealed, the plug will float to the surfaced if rigged up with the pin pulled.   This allows you to hunt down your SWIMMERS if conditions permit.

If you choose to keep the tow bar in tact here is a little tip that seems to increase the action.  Take a piece of mono and tie a knot on the tow bar where you will attach your mainline.  Tie your mainline behind the knotted addition, then push the two as far to the top side of the tow bar. This should, under troll, keep the nose pointed down and increase the swimming action. 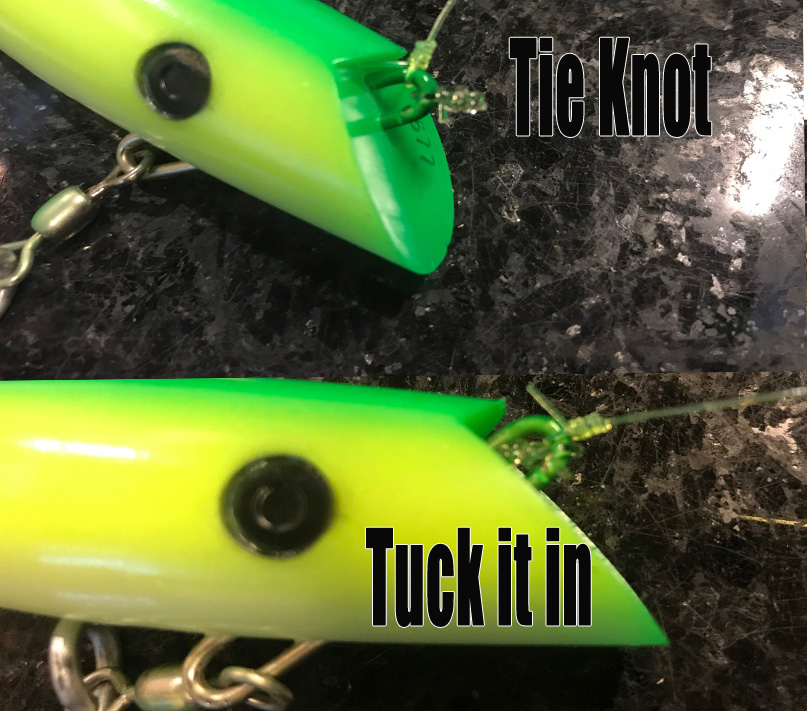 Now let’s talk about pulling the pin.  You will need a good set of cutters and a strong pair of pliers.  Take note the bigger the plug the thicker the pin so get those muscles ready.

A very important note.  You need to make a clean cut of the pin, if you leave a bur you will have a good chance at cracking any insert bodies (labeled with an ii) and then the plug will fill with water and won’t swim.  I hear of some using a grinder to ensure a clean cut.  I don’t think it’s necessary just a good pair of cutters.

Then use your pliers, get a good grip, and with a light wiggle and a straight pull remove the tow bars from both sides of the plug.

Once the bars are out now, we now want to rig the plug with some hooks.  I like to use a tiny bead on the bottom side of the plug then tie tandem octopus hooks as seen in the photo. 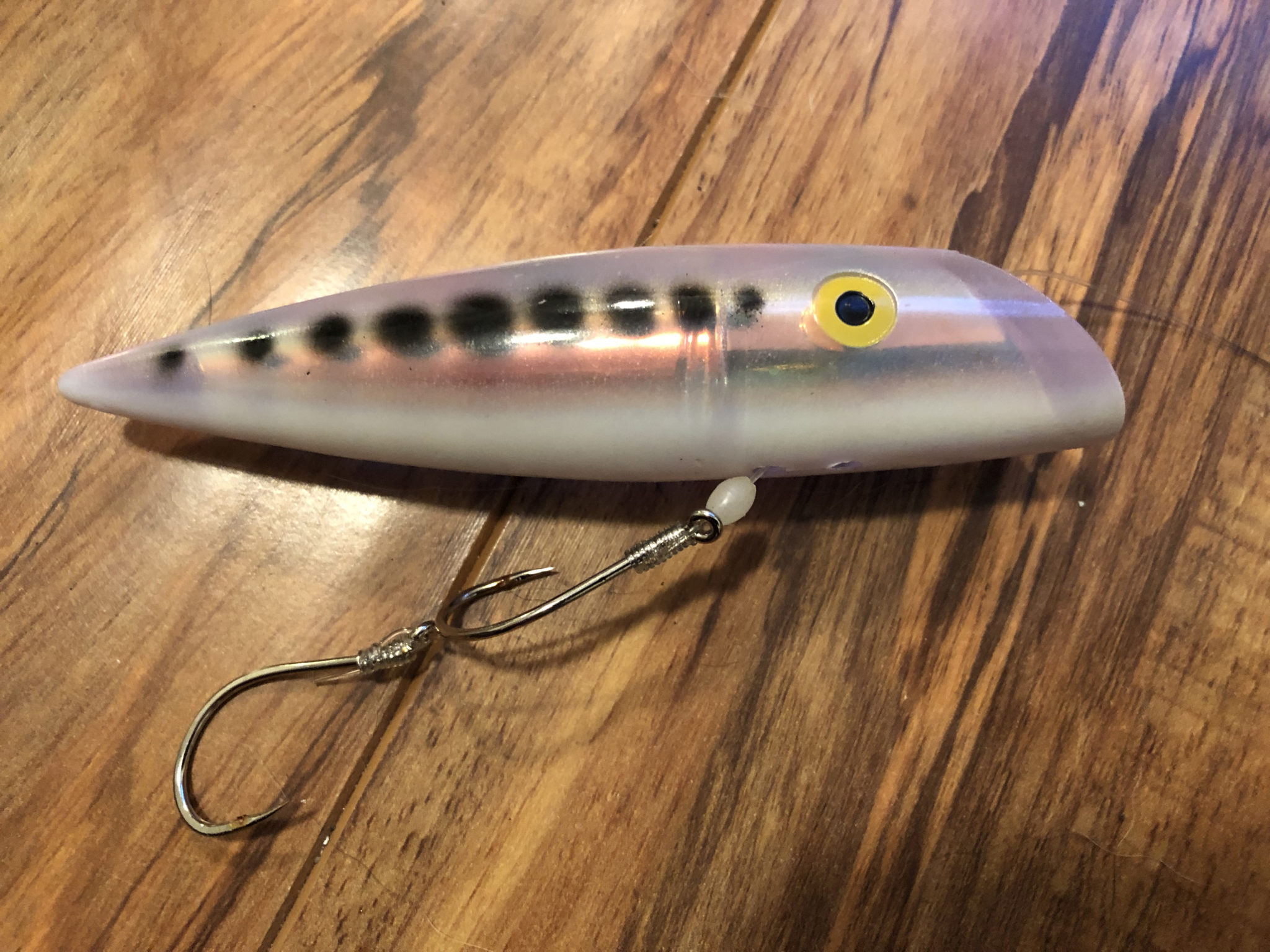 Here is where different methods can be used.  I know of people using tandem trebles and I started that way, only to find the damage to the fish was too much for my liking if I was going to release the fish.  Some will put a small swivel then a single siwash.   I actually found over time the tandem octopus hooks do the least amount of damage so I have stuck to this approach.

Now we are ready to get ’em wet and put them to the test.  Let’s discuss trolling speed and length from the downrigger clip.

The one major advantage of fishing plugs is the ability to cover ground.  You will want to troll faster than you would with a traditional mainline flasher setup, not too much faster, but faster.  Think slightly greater than a 45 degree angle on the cables more like 45-50 degree cable angle.  Alternatively watch them swim on the side of the boat while increasing speed and choose the action you like.   Keep in mind these are one of the most used commercial trolling lures and they troll much faster than the recreational sector.

A tip if you are not going to have plugs on both sides try using a tubby as they swim a bit better at slower speeds or run a hoochie flasher combo as hoochie can always do with a little more whip.

At these faster speeds, particularly in the winter, you will be able to cover more ground than the next guy and track down that bait more efficiently.

Finally, length from the clip.  My usually rule of thumb is 20-30ft from the clip.  I run braided mainline with a 40-50ft top shot of mono.  On clearer days or when I feel the fish are picky it goes right to the knot at 50ft.  I know of some who will go as far as 80ft out however I find this can create tangles on the turn, in hard tides, and rod down time is more important that being an extra 30ft back.  I should say though the person I know who goes 80ft back often out fishes me on plugs when they are being very picky!

I hope to see more Tomic Plug enthusiast out there this season!

Posted on December 20, 2019 by Jason Tonelli in Fishing Reports